Proper Head and Neck Position for the Western Pleasure Horse 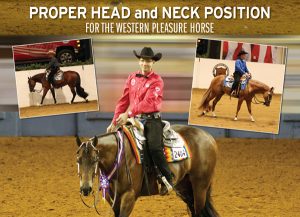 Over the years, the Western Pleasure pen has seen head and neck position span the spectrum. In the late ‘70s and early ‘80s, Western Pleasure horses carried their heads high, moving around the pen with their backs hollowed. Within a few years, the pen was filled with the opposite extreme, horses with their noses near the dirt, referred to by some as “peanut rollers.” Today, the industry’s top trainers and judges think the pendulum has finally settled in the right place – Western Pleasure horses that use their backs to carry their necks level and who appear relaxed in the face and happy about their jobs.

This change is partially reflective of top breed associations’ rulebook verbiage. AQHA’s rulebook states the Western Pleasure horse “should carry his head and neck in a relaxed, natural position, with his poll level with or slightly above the level of the withers. He should not carry his head behind the vertical, giving the appearance of intimidation, or be excessively nosed out, giving a resistant appearance. His head should be level, with his nose slightly in front of the vertical, having a bright expression with his ears alert.” Faults in the class are listed as, “head carried too high; head carried too low (tip of ear below the withers); overflexing or straining neck in head carriage so the nose is carried behind the vertical; and excessive nosing out.” APHA’s rulebook similarly states, “the head should be carried at an angle that is natural and suitable to the horse’s conformation at all gaits. Ideally, a horse should carry its head no lower than level and its nose should be in front of vertical.”

AQHA judge Gigi Bailey says that though correct movement is the most important quality in judging the Western Pleasure pen, “head and neck carriage will help determine how the top movers break down into placings. For instance, if three horses were similar in their movement, but horse A carried its head with its nose slightly out and its neck level, horse B carried its neck a little low with its nose on the vertical, and horse C carried its neck low and its nose behind the vertical, horse A would win, horse B would be second, and horse C third.” Bailey goes on to explain that the slight difference in these headsets show varying degrees of difficulty. “It is infinitely more difficult for a horse to move correctly with excellent head and neck carriage than to be more controlled with a lower neck and its face more contained. Judges will search for the excellent mover that displays excellent head and neck carriage. They will also search for that in other western classes such as Trail and Western Riding.”

NSBA judge Kim Ziegler agrees, adding, “Proper head and neck position shows me that the horse is balanced and the horse is using his body correctly. If the horse is balanced and has lift in his ribs and back, his neck and headset will be more natural and correct.” In addition to the rulebook’s guidelines, Ziegler seeks, “a neck that comes out of the withers level, with a longer topline, and shorter bottom line. I want to see a neck that is lean and supple. I’m drawn to pretty, so if the horse has a pretty head and neck, is relaxed, and looking brightly through the bridle, that catches my eye.”