Prom vs. Horse Show… From the Red Carpet to the Arena Dirt in Less Than 24 Hours 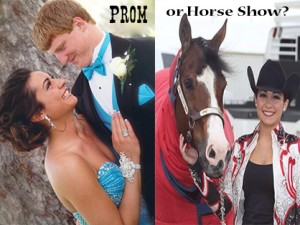 Prom vs. Horse Show. It’s an interesting question and one that has undoubtedly crossed the minds of many young equestriennes. On first instinct, most die-hard competitors would call this a no-brainer, choosing a horse show over a high school social event any day.

However, would your answer be the same if this was a certain milestone like a Senior Prom or High School Graduation? As a competitive equestrian, the likelihood of having school and show schedules conflict is a certainty. If you play another sport or are involved in clubs or extracurricular activities, the problems multiple.

How does she balance it all? Lauren’s mother, Kelli Diaz, shares some insight about the daughter she is proud to describe as hardworking, dedicated, and a role model both inside and outside of the arena.

“She balances her ‘normal life’ and horse showing very well,” Kelli says. “Although her passion is in the arena, she knows her education is and will always be first. Can’t is not in her vocabulary.”

This past weekend, Lauren encountered an interesting dilemma. On one hand, she could attend her boyfriend’s Senior Prom. On the other, she could compete at the SOQHA Youth Show in Wilmington, Ohio. For Lauren, it wasn’t even a question; she would do both!

“Prom weekend was the first time she has ever missed [part of] a show,” Kelli says. “When she decided to attend the Prom, her plan was to ‘prom’ on Saturday, she would only miss western riding and horsemanship, and show in Wilmington on Sunday. The night before, she asked if she could have a few friends over for an after-prom bonfire. I told her, as long as she was in the car at 5:00 am to leave for the show, it was ok by us.” 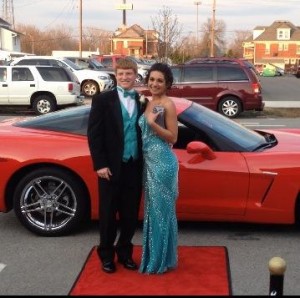 On the red carpet! Photo courtesy of Claudia Wing.

With the schedule decided, cars began arriving at the Diaz household for the after-prom bonfire at 1:30 am. Around 3:45 am, Lauren’s friends moved the party indoors, all 27 of them.

“It was time for her to get ready and leave, however, no one else did,” Kelli says. “As she walked up the stairs, it broke my heart to pull her away from all of her friends that she rarely gets to hang out with. I could tell she was torn between her friends and her horse for the first time ever.”

“As she walked out the door with her dad, she turned and said, ‘Thank you for everything. It was awesome. I love you.” Feeling horrible, I sent her a text and told her if I had to do it all over again, her horse Chucky would have had the weekend off. She text me back and told me that even though it was hard to leave everyone, it was her decision and she wanted to go show.”

With her hair still in coiffed curls and no sleep in the tank, Lauren arrived at the show at 6:30 am and began her regular pre-show preparations. Trading in her sequined gown for show ring sparkle was fairly easy, but switching from a fancy updo to a polished bun took a bit more work. Luckily, Dad was able to lend a “helpful” hand with a horse vacuum… 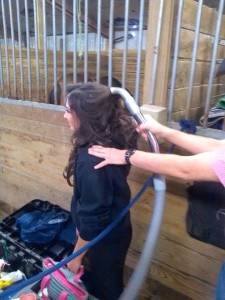 “When she got home, I told her she went from the red carpet to the arena in less than 24 hours,” Kelli says. “She finished just as strong as she started…38 points in 3 classes with no sleep!”

Special thanks to Kelli Diaz for sharing this fun story about her daughter’s around the show ring adventures. We love hearing about multi-talented competitors who succeed both inside and outside of the show pen. If you have a fun story you’d like to share with our readers, e-mail b.bevis@equinechronicle.com to find out how it can be featured on our website.