ProElite® Line of Ultra-Premium Horse Feed Now Available Across US 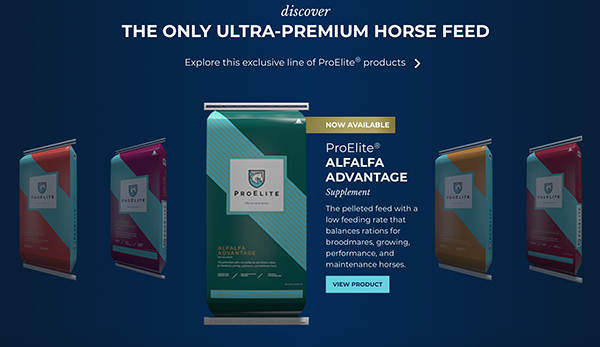 MINNEAPOLIS (July 9, 2019) – For horse owners focused on performance, choosing the right feed can make all the difference. Now, horse owners across the U.S. have access to the best horse feed line on the market. ProElite®feeds, the market’s first ultra-premium horse feed, give horse owners the confidence they need to win.

First launched regionally in 2017 by Cargill as a completely new line of products, ProElite feed is now available nationwide for horse owners looking to achieve peak performance in their horses.

Without quality nutrition, horses are at a disadvantage. That’s why some of the best horse professionals count on ProElite feeds. “Horses need a feed with premium ingredients and excellent nutrition,” said Russell Mueller, U.S. retail equine marketing manager for Cargill. “ProElite feeds use a special blend of ingredients, specifically developed to support performance and stamina, as well as maintain overall condition and appearance.”

Composed of an exclusive amino acid profile, ProElite feeds are designed to promote enhanced appearance, performance and wellness. Regulated levels of sugar and starches give horse owners confidence in their calorie sourcing. And with six strains of probiotics and two forms of prebiotics, ProElite helps ensure the horse’s digestive tract is working at peak efficiency.

“We believe there can only be one best,” Mueller said. “ProElite feeds are designed to give horses the competitive edge they need to rise above the rest.”

To meet nationwide demand, Cargill will distribute ProElite feeds through a network of more than 20 manufacturing and stocking facilities across the U.S.