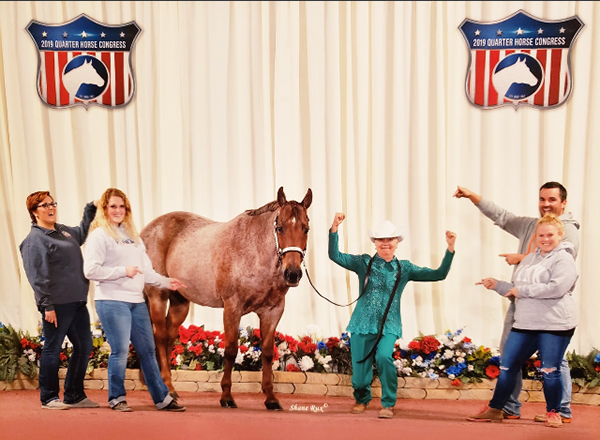 Showing horses can be a challenge. There are the countless hours spent grooming, riding, practicing, and honing your craft. There are the days spent on the road traveling to and from horse shows. Then, the event itself is sure to come with many early mornings and late nights. But, we do all of this for the love of the sport. We love the horses. We love the people.

At least that’s why AQHA exhibitor, Kathy Stoll, has continued to show her horse while battling pancreatic cancer for the past two years. Kathy’s partner in crime is an 18-year-old gelding named Good Grief Charley Brown, a horse she describes as “the most wonderful red roan Quarter Horse that God ever created.”

“Charley may be 18 years old, but don’t tell him, because he can act like a nice two-year-old some days when he’s feeling very sprightly. We will have been together five years next month,” Kathy says.

Kathy got her first horse when she was just eleven years old, a Half-Arabian, and had horses until she got married and had kids. After a little break, Kathy’s daughter decided she’d like to ride horses as well. Then, after Kathy’s kids were grown, she decided she missed it too much and bought a horse of her own. “I missed it tremendously,” she says.

Today, Kathy competes in classes like Halter, Hunter Under Saddle, Western Pleasure, Horsemanship, Trail, and her favorite, Showmanship. “It’s a funny class, because you either love it or hate it. It gives you the chance to show off a little bit, not in a conceited way, but you can be a little sassy and sharp. You have to think a lot, and it can be very complicated.” 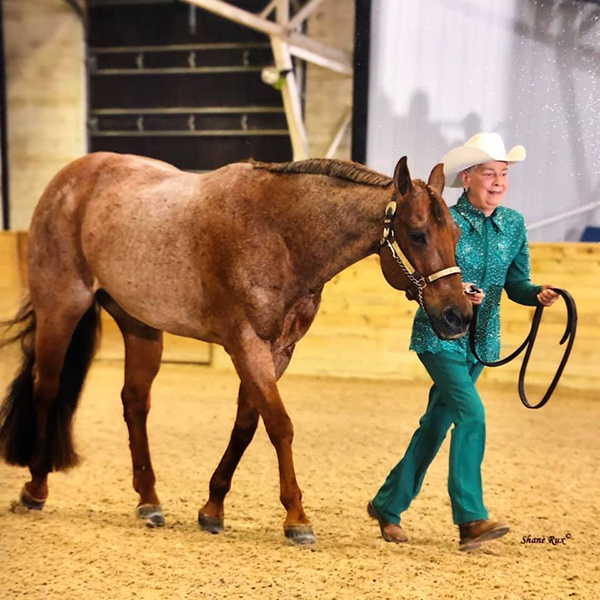 Kathy is also on the Board of Directors for the Empire State Quarter Horse club in New York. That was how she first heard about the Quarter Horse Congress. “We have several shows throughout the year with a big one in the fall just before the Congress. I work as the show awards coordinator and people were always talking about the Congress and asked when I was going to go. I really didn’t have the confidence to do it until I got with my trainers, Brenna and Joe Stoelting. They said, ‘Why not go to the Congress?’ They have been a huge help, and they take such good care of Charley.”

That’s how competing at the Congress became an item at the very top of Kathy’s bucket list. But, her plans hit a speed bump in June 2017 when she was diagnosed with pancreatic cancer and several tumors on her liver. However, that certainly wasn’t going to stop Kathy.

“I started going in for chemotherapy every other week at the doctors’ office for several hours. Then, I would come home with a pump that would distribute more chemo for an additional 48 hours. I have gone every other week for the past two years.”

“But, my doctor is very good, and I talked to him about going to the Novice Championship this year and also the Congress. So, he let me skip a little chemo so I would feel better and, of course, he gave me medicine for all the side effects.”

So, with permission from her doctor, Kathy and Charley headed to Ohio to compete in Novice Amateur and Select Showmanship. Although she didn’t receive any high placings to speak of, she was so thrilled to just be able to attend the event.

“My scores were in the 60s, so it wasn’t the greatest, but it wasn’t the worst. I didn’t have any DQs or major faults, and I was able to make it through the patterns. I don’t know how to describe it, really. It just felt so good to be there, and Charley seemed to have a good time.”

“It was all I thought it would be and more. It was so wonderful to see people I’ve come to know over the years, and it was very nice to have a big cheering section. It was a very well run show, and I enjoyed every moment of it.”

When it came time to commemorate the occasion, Kathy, Charley, and her trainers headed over to Shane Rux Photography to have a photo taken, but they wanted this one to really reflect Kathy’s journey and her excitement about competing at the Congress for the first time. “Joe said we should do a fun picture, and I said, ‘Absolutely!’ Then, we all got wonderfully silly.”

After returning home from the Congress, Kathy visited her doctor and discovered that the chemotherapy was no longer working as well as it should have been, so her treatment plan has changed. “I was doing well for a while and then everything went back to where it started. Currently, I’m undergoing immunotherapy for the pancreatic cancer, and I just had a procedure where radiation beads were inserted into one of the tumors on my liver. They will put more beads in the other tumor in January.”

Looking on the bright side, the neuropathy that had plagued Kathy’s legs over the past few years, a result of the chemotherapy, has lessened, so she’s excited to get back to riding. As she faces these health challenges, Kathy remains steadfast with a positive outlook and an optimistic spirit, which is a credit to her strong faith.

“My advice to others going through something similar is that as hard as some days can be, you just hold on to God’s hand and try to keep going. There was a time when I wanted to give up. I was going to sign Charley over to Joe and Brenna and call it quits, but they wouldn’t let me. My husband, Jim, calls Charley the best medicine I can have.”

“I just have to pray and persevere. Faith, family, friends, and Charley is what’s getting me through. Make your good days as great as you can. I really appreciate all of the support that I’ve gotten from Joe and Brenna and all the people at the barn.”

If you have a great story about someone special in the horse industry, email B.Bevis@EquineChronicle.com.