Ponying Horses – The Do’s and Don’ts 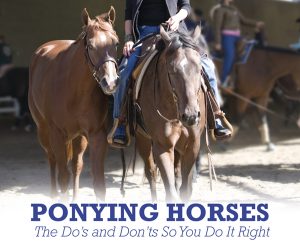 It’s a familiar sight at any horse show. A rider, astride a mount, leads another unsaddled horse alongside. Whether solely for exercise, desensitizing to the show environment, or simply because there were no more longing spots to be had, ponying a horse is a well-used training and conditioning technique. But, as any rider in a crowded warm-up pen can attest, there’s definitely a right and a wrong way to do it. Also, ponying isn’t just a skill to be reserved for horse shows. As we will learn from our experts, there are a wide variety of applications for ponying, back on the ranch, as well.

Jason Smith ponies plenty of Halter horses while he’s preparing them for shows, and he has accumulated many World Champion titles. He’s a big advocate of teaching a horse manners first. His horses learn respect, whether he’s working with them on the ground or leading them from another horse. He believes the skills his horses learn from ponying gives them an excellent foundation for the show pen.

Smith cites two major reasons for incorporating ponying into his training regime. “First it’s about the socialization aspect. They get used to having other horses around them. The other is soundness. I think it’s a lot better to be working them in straight lines than it is to be going around and around in circles.” He adds that ponying isn’t exclusive to Halter horse people. “The All-Around folks and Western Pleasure folks have horses that have soundness issues, that need to be out and exercised, or they need to pony them around at a show and get them used to everything. It’s much better for them to be working in long, straight lines as well.”

Smith believes that properly ponying a horse at a show starts with a lot of work at home. He reasons, “If you’re not experienced in ponying horses, then the horse show environment isn’t the first place you should be doing it. I would make sure that my horse is very used to being ponied, and the people ponying are very used to doing it; before you try it at a show.