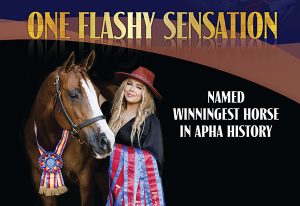 One Flashy Sensation is a mare that will go down in history as the horse that kept winning. 32 World Championships follow her name, making her APHA’s most winning horse of all time. She’s done it all—Western Pleasure, Trail, Western Riding, and Hunter Under Saddle. The mare is a natural in the pen and as charismatic as they come. Her legacy will be her accomplishments in the show pen. However, she’s remembered by those who love her as, “the mare who changed my life.”

Once a prominent Non-Pro exhibitor, Sara Simons gave her Amateur card up in 2008 to become one of the leading professionals in the all-around industry. Simons’ talent on horseback is what propelled her career as a professional. However, she attributes much of her success to the sorrel mare she calls “Mel.”

Mel is a 2005 mare by Zippos Sensation and out of Flashy M J M (a Thoroughbred). She began her career with Simons as a two-year-old in Western Pleasure. “I got her at the beginning of her two-year-old year. I knew her bottom side was definitely different than your typical Western Pleasure horse,” Simons laughs. “But I think that’s what makes her. It adds to her longevity and has made her a little trying at times. She’s an extraordinary horse, and there’s a reason she goes and goes and goes and goes, because she’s kind of bred to go and go and go.”

That “go, go, go” personality has proved more special than anything else over Mel’s career, which has spanned 14 years. As a team, Simons and Mel have won APHA World Championships in 2-Year-Old, 3-Year-Old, Junior, and Senior Western Pleasure divisions, making her the only horse to win all four. As a 16-year-old mare, Simons says that Mel still does quite well, for her age, in Western Pleasure classes. Simons would know, because as she and others who know the duo describe Simons and Mel’s relationship, “Sara knows that mare like the back of her hand.”