On The Cover – Madison Nirenstein 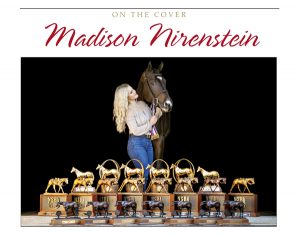 Madison Nirenstein distinctly remembers watching the AQHA World Championship Show as a child, since spectating at the show was an aspiration she had unwaveringly set for herself. Once she watched, she was hooked, and her goals quickly transformed into competing there one day.

Madison made her mark first with Hubbout A Dance, aka Henry, in 2019 at the NSBA World Championship in the Maturity Non-Pro Hunter Under Saddle, followed by a win the next year in the same class, along with a win in the Novice Amateur Equitation. Then they completed her AQHA World Show goal, second on her list, at the 2020 AQHA World Show in Amateur Pleasure Driving, an accomplishment she says is one of her greatest, under the guidance of Highpoint Performance Horses.

“I was able to finalize that goal by winning two Congress Championships in both the Maturity-Non Pro and Limited Non-Pro Hunter Under Saddle with Henry which was pretty special,” she says. “And that was the last one of the three I needed! It’s been nice to finally watch my dreams transpire thanks to everyone at Highpoint,” Madison reveals.