Noel Meadows – From Student to Coach through NCEA 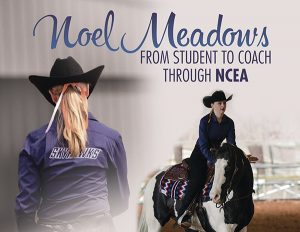 Noel Meadows might not have always known exactly what her future would hold, but of one thing she was certain–it would involve horses. The daughter of AQHA multiple World and Congress Champion trainers Steve and Becky Meadows, this talented equestrian athlete started with humble beginnings working as a groom on her parent’s farm. In recent years, she has made quite a name for herself by becoming one of the most accomplished riders in NCEA (National Collegiate Equestrian Association) history while competing for the western team at the University of Tennessee at Martin.

Growing up on her parent’s farm in Staunton, Virginia, Meadows got her start with horses by riding at home and competing at local shows in walk-trot before developing a real passion for competition. “It was a family thing,” she says. “My parents always left it up to me whether I wanted to show. I started out just playing, but then as I got older, I got more serious about wanting to show.”

As the daughter of a multiple World and Congress Champion in Western Pleasure, it might be easy to think that Noel got her start in the pleasure pen. In reality, she started her career in Over Fence classes showing both AQHA and USEF. “I started out doing walk-trot, but my mom actually started out doing Jumpers, so I started out doing Hunters,” she explains. “As a youth, I showed on the USEF circuit.” When asked if she ever felt pressure to show in Western Pleasure because of her father’s success, Meadows was quick to remark that she has always preferred to show off the rail, and her parents respected that decision. “My dad, of course, had great pleasure horses, and I’ve ridden a few,” she says. “But I’ve always enjoyed events with more speed. I never really felt pressure to show in Western Pleasure. My parents have always let me choose what events I want to show in.”

Meadows’s choice to show outside the pleasure arena proved to be a good one. Working with her mother, Becky, as well as trainers such as Sandy Vaughn and David Warner, in 2015 she was named Reserve Champion in both Working Hunter and Equitation Over Fences at the AQHA East Level 1 Championships. That same year, she went on to place third at the Congress in Novice Youth Equitation over Fences.

Her success continued in 2016 when she was named Reserve Champion at the Congress in 14-18 Working Hunter with Dance If You Wanna, a horse that both Meadows and her mother say is a barn and family favorite. “The mare that I was Reserve with at the Congress in Hunters was one of my favorites to show,” she reminisces. “I wanted to take her to the Youth World show so bad, but we had a waiting list of people to buy her right after Congress, so she sold.”

The Move to NCEA