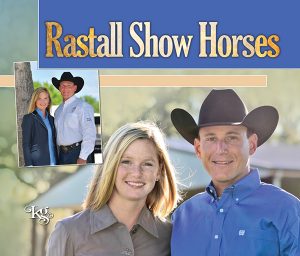 After ten years of dating, Brian and Ashley (Frappier) Rastall married this past September. Both are well-known and well-loved former assistant trainers at barns such as Pine Meadow Quarter Horses, Masterson Farms, and Starnes Quarter Horses; but now, the two have struck out on their own as Rastall Show Horses. Their commitment to each other, their clients, and their horses has made for a successful start to their partnerships in both business and married life. The key to both, they say, is communication.

“We communicate as much as possible. We always try to keep each other in the know as new things arise. Of course, there are bumps in the road as there are in any business, but we try to remain understanding of one another and pick up for the other person when necessary,” Ashley says.

Brian is originally from Chardon, Ohio, while Ashley grew up in Framingham, Massachusetts. The two met in 2009 while students at the University of Findlay.

“As a sophomore in college, I was going into my first semester starting colts when I met Brian. He was a senior and an intern for the university. We got to know each other after Brian gave me some pointers on my project horse. We hit it off and started dating shortly after,” Ashley recalls.

The couple bought their first home in Ocala, Florida, and are currently renting stalls from Pine Meadow Quarter Horses in Reddick, Florida, where they had worked as trainers in 2015. Pine Meadow has everything the couple needs for their training business, including a covered riding arena, a large, outdoor riding arena, a hot walker and a covered round pen. At this time, they have one employee, Jodi, who the couple calls “a blessing to us” and whose responsibilities include tacking horses, administering medications, and taking care of the horses while the couple is away at shows.

The transition to being their own bosses has gone very smoothly. Though there could’ve been many surprises when putting out their own shingle, the biggest thus far, according to Ashley, has been a pleasant one. “Being out on our own is much more rewarding than we anticipated it would be,” Ashley says. “There is a lot of pressure to do well and achieve with the horses and clients. We’re so fortunate to be able to work with a great group of people and are always thankful for them.”