New Genetics Research Could Lead to Test For EMS 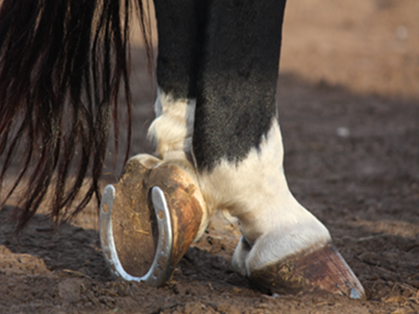 ST PAUL, MINN. —– A team of University of Minnesota College of Veterinary Medicine equine researchers recently set out to investigate genetic mutations in two breeds that are at higher risk for equine metabolic syndrome (EMS): Morgan horses and Welsch ponies. The scientists found that EMS is polygenetic, which means horses with an EMS diagnosis often have mutations on more than one gene. They also found both breed-specific mutations associated with EMS, and mutations shared between the two breeds.

Equine metabolic syndrome (EMS) is linked to obesity, insulin resistance, and laminitis—a painful and debilitating inflammation of tissue in a horse’s hooves, which can necessitate euthanasia in severe cases. This study aimed to equip horse owners and veterinarians with a potential path toward getting ahead of this debilitating disease through genetic screening.

The researchers concluded that a single gene genetic test will not reveal to owners whether or not their horse is genetically predisposed to EMS. Rather, the scientists suggest further research be done into developing a more intricate panel test to meet the complexity of the disease’s genetic nature.

“We estimate that a panel test may not be available for another two or three years,” Molly McCue, DVM, MS, PhD, associate dean of research and professor in the Department of Veterinary Population Medicine at the CVM, whose lab led the study.

“Once an appropriate test is developed, horse owners and breeders would need to collaborate with their veterinarian and an equine geneticist to apply and interpret the test.” says Elaine Norton, DVM, MS, PhD, a principal investigator on the study.