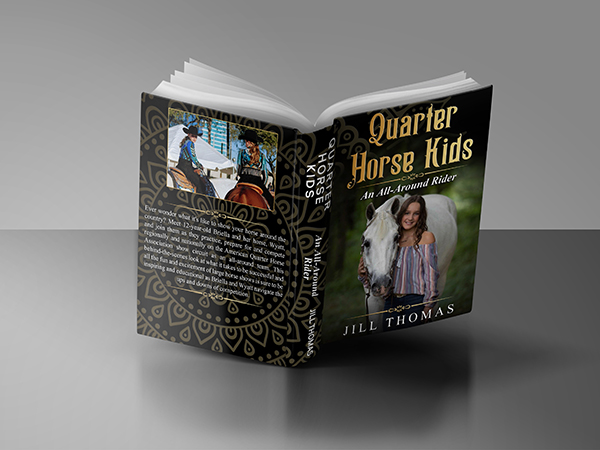 Like many of our readers, Jill Thomas grew up with horses in her backyard and did a bit of showing on the local scene. Then, she went off to college, got married, and had kids. But when her daughter, Leah, turned seven, the horse bug bit the second generation, and the mother-daughter duo purchased a horse and a pony to jump back into the ring.

“She did 4-H and eventually joined the Vermont Quarter Horse Youth Association,” Thomas says. “Once she started showing AQHA regionally, I sold my horse and supported her riding. Then, there was another break while my husband, Jeff, and I put both Leah and my son, Griffin, through college.”

Thomas competed under the guidance of Gene Spagnola and Gretchen Mathes for three years. Her current mount is a mare named Its Al Ways Sumthing, aka ‘Chichi,’ who she’s been showing on the national circuit for the past three years.

When her daughter started showing Quarter Horses, Thomas often found it difficult to explain to friends and family what the process was all about. “She’d come home from a show, and no one in our area had any idea about what specifically a Quarter Horse show was all about. People would assume she raced barrels or did rodeos. When she said she rode English, as well as Western, people assumed she jumped or did Dressage.”

“I guess, because of those experiences with her, and even now showing as an adult, I’ve always felt that there’s so much about AQHA that people just don’t know anything about, even if you’re in the horse world. There are so many ways that Quarter horses are ridden, in competition and for pleasure, and people and kids, in particular, might be really interested in our breed.”

That realization is what prompted Thomas to write her first book, Quarter Horse Kids- An All Around Rider. When Thomas was a young equestrian, she remembers a book called A Very Young Rider that told the story of a young girl, who competed in the Hunter/Jumper world. Even though Thomas was an equestrian herself, she never imagined that there were other events she could do with her horse besides trail riding. “That book gave me a look at another world of horses, and I just loved looking at all the pictures and dreaming of all the wonderful adventures that girl was having,” she says.

Following in that theme, Thomas reached out to Whitney Lagace to inquire if she had a young rider in her program who might be a good fit as the book’s subject. “I started with a conversation with Whitney, followed by meeting at the barn with Briella Ortega, my young rider, and her parents. I talked to them about what I wanted to do and then took a bunch of pictures. I had a general idea of the elements of the book and what I wanted to include, as well as what I didn’t want, so I took photos that would illustrate those things. I didn’t want the book to be a how-to manual or a horse care book. I specifically wanted it to be a look into the AQHA horse show world, and I hope that’s what I’ve done.” 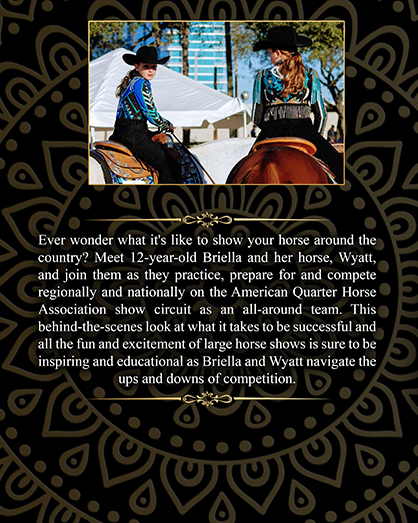 The series, Quarter Horse Kids, will highlight one young rider in each of the various ways Quarter Horses are used for competition, work, or pleasure, Thomas explains. “This first book, titled An All-Around Rider, follows one youngster and her horse through the practice, preparation, and competition regionally and nationally as an all-around team. The book has a bit of info about Quarter horses in general, a bit about some basic horse care, and a lot about what it’s really like to show. It includes the ups and downs of teaming up with a horse, the fun stuff like staying in a camper and going out to dinner, details about the different classes with patterns, and a glossary with all the necessary terminology.”

Thomas has hopes to include other types of riders in the series, like equestrians who compete in Cutting, trail riding, Reining, rodeo, and Ranch Riding. While there are other equestrian-themed books out there with basic horse terminology and facts about horses, what sets Thomas’ tome apart is its specificity.

“This idea has been rumbling around in my head for at least a decade,” she says. “I guess once I decided to ask Whitney Lagace if she had a kid who would work for the project, I was committed. The first draft wasn’t as complete as what I’ve got now, and I have my editor to thank for that. She isn’t in the horse world, and my goal for this series is to explain things in such a way that anyone could understand what we do when we show, while also inspiring young kids to want to learn more about riding and AQHA.”

This literary adventure provided many firsts for Thomas as she became well-versed in the ins and outs of writing, proofreading, rewriting, planning, editing, formatting, and publishing. “After I got the pictures I thought I’d need, I put them in order and started writing. I found that I was missing some pictures and spent some time at the next shows getting those. I had a couple of people read the rough draft and found that it wasn’t as personal as it could be, so I went back to the re-writing process.”

“Once I added the glossary, got the text just right, and fussed with the photos, I hired someone to edit, copy edit and proofread. Then, there was more re-writing. Then, it was on to formatting to get everything to lay out correctly. I had to hire someone to design the cover for me as well. As far as publishing, I had been in touch with a prominent horse book publishing company and they had expressed some interest, especially if I could get AQHA to endorse the book. That seemed a bit presumptuous to me to ask AQHA for such an honor for something that wasn’t even a real thing yet, so I didn’t contact them at that point. I since decided to self-publish and that publishing company may be interested in the second book!”

When it came time to select someone to write a foreword, Thomas immediately thought of her trainer, Gene Spagnola. “Geno is my trainer, along with Gretchen, and they’ve both been really helpful and supportive through this whole year and a half since I’ve been working on the book. I don’t think they actually thought I’d pull it off and follow through with the book, and I’m glad that I did. When I was thinking about what I could add to the book, I thought of Geno doing the foreword, since he’s the chairman of the AQHA Professional Horsemen’s Association. I asked if he would be comfortable writing the foreword, and he said he’d be honored. He wrote about the positive influence of horse competition on the many young people he’s had the privilege of coaching over the years and how the lessons they learned with their horses carry over into their adult lives.”

Thomas is very pleased with the final product and is delighted with the feedback she’s received so far. “I’m excited about doing a next book in the series, but I need to figure out this whole social media marketing thing! Guess I’ll have to hire someone for that for sure. I hope that this is a helpful and inspiring book for young people everywhere and educational for all the parents and grandparents who don’t know what the heck we’re doing!”

Quarter Horse Kids- An All Around Rider is available on Amazon.