“Too many cooks in the kitchen” is a common trope of supervisors and employees alike. I can’t speak for the entire Texas A&M Equestrian Team, but those words were certainly running through my head when Coach Tana McKay announced that we would no longer have a team captain. 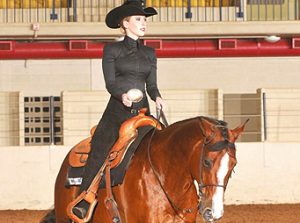 As insignificant of a change as this might seem to some, I believe that any athletic team might struggle without declared leadership; especially when the majority of people on the team have competed individually for their whole lives. During my freshman year, the TAMU Horsemanship team captain was Avery Ellis, and I came to her with absolutely everything. For every concern, dilemma, misunderstanding, and clarification, Avery was just a text away. She was a confidant for many girls on the team and ensured that everything, from practice to meet day, flowed smoothly. However, I had never realized the burden of responsibility that comes with the honor of the title. Yes, from my freshman point of view, captainship seemed like a dream come true; but, after the switch was made to a captain-less team, I often wonder how one person could have done the job by themselves.

Coming into this year, the move away from captains left almost everyone scrambling. To start, there was miscommunication. To give an example, on every meet day, the captain would create a list of tasks that needed to be accomplished. But, since there was no designated person in charge of making this list, we ended up with three different lists because everyone wanted to step up and help out. After noticing that we needed more complete communication, I began to see every girl communicate more thoroughly in the team group chat. Also, despite the fact that everyone was a little frustrated with the redundancy of the lists, I feel as if we were all able to step back and realize how incredible it was that so many girls wanted to step up and take on more responsibility without the promise of a title.

This step back is exactly what I needed. Despite knowing that every one of my teammates wanted to be present and contribute, the physical manifestation of their efforts served as a reminder of how lucky I am to be a part of this team. Furthermore, I realized what this change in leadership style had done for my teammates and myself. It had allowed us to define our own roles. While one of the most important abilities of a captain is that of delegation, it’s not possible to delegate every job to the person best fit to complete it. Once there was no one left to delegate, we began to make these decisions as a team. We allowed people to express their dedication to the sport in ways that best fit their personalities. It wasn’t as if the girls weren’t passionate about their assignments before; but, after this shift in leadership, I watched girls go above and beyond in ways that I hadn’t seen previously. This attitude was contagious. Within a week, girls who had been hesitant about contributing in team meetings were stepping up and voicing their opinions in larger group discussions. The change allowed everyone to express themselves in ways that weren’t available previously. It empowered every girl to speak up when a process needed to be changed.