My Intention – Behind the Stall Door with a Million Dollar Sire

January 20, 2017 | Filed under: Current Articles,Editorial,Featured | Posted by: Alex A. 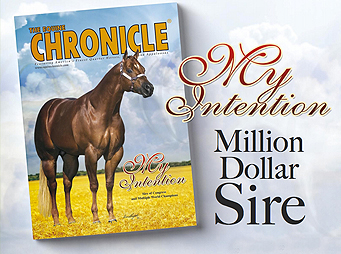 It takes a special horse to share a namesake with the famous Thoroughbred, Triple Crown winning racehorse, Secretariat, also known as “Big Red.”

“My Intention,” (Playgirls Conclusion x RPL My Te Touching), a 2006 AQHA chestnut stallion also known as “Big Red,” has proven his worth by being one of the top Halter sires in the industry. Although there aren’t many similarities between the two disciplines, both of these horses have had an incredible impact on their respective industries.

At just ten years old, My Intention has sired offspring that have eclipsed earnings of $1,000,000. Those numbers keep climbing as his offspring continue to shine in Halter classes all over the nation. Behind his success are humble owners, Jim and Georgia Snow of Quinlan, Texas. Independently, Jim and Georgia have been involved with horses since they were children. Together, during their 40 years of marriage, they have become a force to be reckoned with, both in the show pen and the breeding industry.

The Snows purchased My Intention when he was a late two year-old from Bitter Lake Quarters and Paints of Tuttle, Oklahoma. “We recognized the potential for him to be a sire from the moment we first saw him,” Jim says. “We started out by owning half-interest in him and eventually bought him outright.” During his brief career as a show horse, Big Red was undefeated during his 3-year-old year leading up to the AQHA World Show where he was named the Reserve World Champion in 3-Year-Old Stallions. Afterwards, he retired to the breeding barn to begin his career as a sire. Lucky for the Snows, Big Red seems to stamp each baby with his correct conformation and great mind. “He has such excellent conformation,” Jim says. “He’s a big, correct horse with a lot of muscle and depth. He has such a nice, short back, good hocks, a fancy high neck, and he’s pretty headed. He has been such a blessing to us because he’s passing these traits onto his offspring.” The vision that the Snows have for Big Red has been affirmed by many of the breeders and owners that have supported him throughout the years. “He has some really great babies out there, but he also has some really wonderful and hardworking people that support him. We’re grateful to them for sharing our vision,” Jim says.