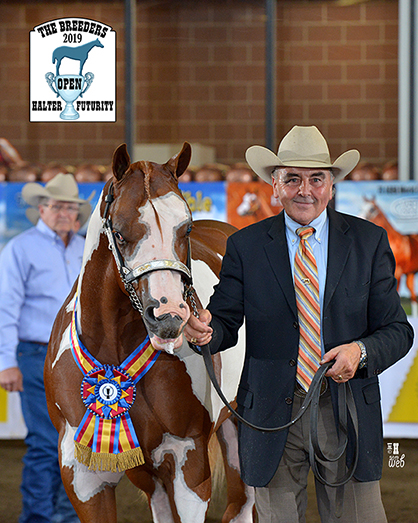 A momentous occasion took place yesterday during the first day of the Breeders Halter Futurity.

Among the many winners named in the arena, Tom Robertson claimed the title of Yearling Stallions Champion in a class of 26 entries with a horse named, Swole, for Beus Quarter Horses and trainer, Jerm Christensen. It was a big win for all of those involved, of course, but it had even bigger meaning than most knew at the time. However, this is something that Georgia Snow had predicted just one month ago…

Many of our readers have seen the latest edition of The Equine Chronicle with a cover featuring the All Time Leading Sire of Money Earning Halter Horses, My Intention. The 13-year-old Halter horse, known as “Big Red,” has been owned by Jim and Georgia Snow since he was just two years old. During his career, he has surpassed all expectations to become one of the leading sires of his time.

Entering this fall futurity season, Big Red was on track to become the first-ever two million dollar sire, as he was only $42,000 shy. Given his past record of offspring earnings at the Breeders Halter Futurity, year after year, Georgia predicted he could hit the milestone on the very first day, and that’s exactly what happened.

“In all the past years, his foals have won between $100,000 and $250,000 at each of the Breeders Halter futurities, so we think he will probably hit the mark on the first day this year.”- Georgia 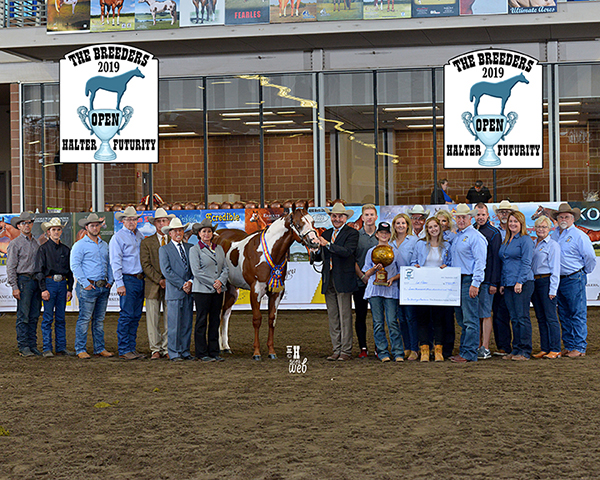 Bred by Jason Smith, Swole is by My Intention and out of A Morning Verse, so when Tom Robertson led the colt to win Yearling Stallions yesterday, he helped Big Red achieve a huge milestone as well.

A big congratulations to the Snow family on this exciting accomplishment!