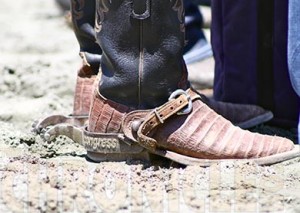 World-renowned motivational speaker Rick Rigsby, Ph.D., challenged attendees of the 2013 APHA Convention to make a lasting impact in their lives. Acknowledging the challenges imposed on the horse industry by the economic downturn, Rick preached that the association’s best days lie ahead—if members are willing to change their mindset and make an impact, rather than merely an impression.

Delivering a passionate speech based on his book, Lessons from a Third-Grade Dropout, Rick shared five pieces of wisdom learned from his father, cited as the wisest person Rick has ever met. Among the gems of timeless advice are:

1. Don’t judge.- It’s human nature to take judgment upon others without getting to know someone—that eliminates any opportunity to learn from them, which puts a limit on your ability to grow.

2. Be an hour early, rather than a minute late.- Live a more disciplined life so you can live more freedoms of life. Modeling good behavior and discipline impacts others and puts you in a position to help somebody else.

3. Kindness is never lost.- Kindness used to be a value; now, it’s more often used as a bartering tool to get what you what. George Washington Carve said, “When common people do common things in uncommon ways, they command the attention of the world.”

4. Help people.- You’re never too good to help others.

“Great people don’t quit,” Rick said. “They keep standing, no matter what they see or go through.

“It doesn’t matter how long you live; what matters is how you live. Tell the truth, do what you say you’re going to do, be kind to others and do a job with the greatest effort possible. If you do that, you’ll leave the next generation with something your grandparents left you: wisdom on how to make an impact, not just an impression.”