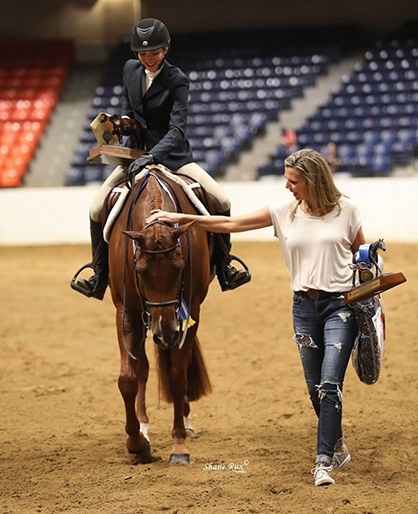 It’s a rare enough feat to have one Congress Champion in the family, let alone two. But the mother-daughter duo of Lauren and Jillian Stopperich have done just that with their recent performances at the All American Quarter Horse Congress. (There’s actually a third in former performances by eldest daughter, Paige Stopperich.)

“I love being able to show alongside my mom, because we both share the same passion for horses, and doing it together is the best,” Jillian says. “My mom is the person who got me into showing and, without the industry, I don’t know what I would be doing today. My mom and I are always helping each other with Dodger and giving each other tips to work on. Although sometimes it’s hard to show the same horse, I wouldn’t change a thing.”

For Lauren, it’s hard to put her emotions into words. The experience of having two daughters, in Jillian and Paige Stopperich, both finding successful and fulfilling careers in the horse industry, is very special, indeed. 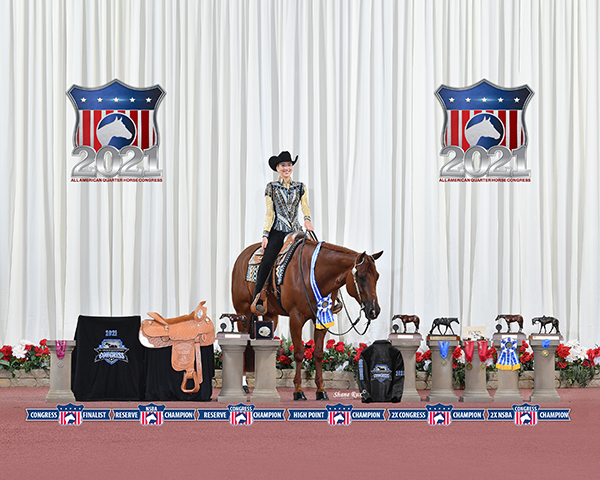 “Getting to introduce my daughters to a sport/hobby that teaches them so much about themselves, as well as teaching them the special talent of learning to communicate with an animal, while learning to trust that partner in order to be successful, is truly something special,” Lauren says. “The bonds they developed over the years with all their horses have been fascinating to watch.  In addition to showing with Paige and Jillian, my sister, Shannon Cairone, also shows with us. Over the years, Aunt Shannon has always been their biggest supporter, in addition to their harshest critic. She has been there for all the highs and lows, and I wouldn’t be able to do it without her. The memories and stories we have experienced will be with us forever and will always keep us tied to an industry we love and will continue to support.”

Jillian has been competing with Dodger for five years now, and she describes him as her “heart horse.” As a team, they compete in all-around classes including Horsemanship, Equitation, Trail, Western Riding, and Showmanship.

“He’s such a quirky horse, but one of the most trying horses,” she says. “He always gives 100% no matter what. We call him the big red dog, because all he does is lick you.”

Winning the all-around youth title at the Congress is something Jillian always dreamed of, but wasn’t sure if it would ever come to pass. “I never thought I could win it, since the competition at Congress is so tough. Two years ago, I would have been up for the all-around, but I didn’t show in enough classes. Coming into my last year, I wanted to go for it, even though I knew it would be hard. I never thought it was possible for me to win two classes and be Reserve. Hearing I won the all-around just brought so much joy.” 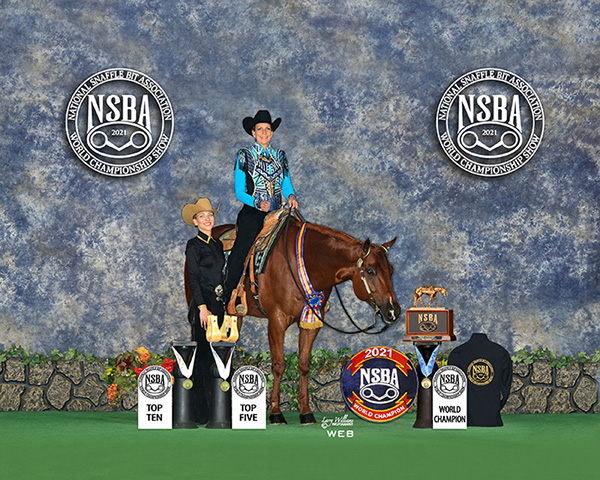 Jillian’s most memorable moment from the horse show was winning 15-18 Equitation and Horsemanship, as the latter was always a long term goal. “Having my mom, my aunt, and especially my sister there to watch me just made it all better,” Jillian says. “My dream was to always win 15-18 Horsemanship. When it actually happened, I was shocked.  Winning Equitation too was just icing on the cake. Never did I ever think I would win Equation, just because Dodger is a bit smaller. Being second in Western Riding was also so special, because that has always been our hard class, due to him being green. I never have super high expectations for that class, since Dodger is still learning, so coming out and hearing my score was shocking and one of the best feelings.”

Lauren shares Dodger with Jillian and enjoys competing with him in all-around events as well. As much as she enjoys competing herself, Lauren was most proud to watch her youngest win both 15-18 Horsemanship and Equitation at the same show. “Jillian has worked really hard on improving her horsemanship and learning to trust Dodger in the show pen,” Lauren says. “I was just thrilled to see their hard work pay off. Winning both those classes on the same horse truly demonstrates the versatility of the Quarter Horse and Dodger. Winning the 15-18 All Around was icing on the cake.”

As Jillian’s youth career comes to an end, she would like to extend special thanks to people who have helped her along the journey. “To my parents, Lauren and Shawn Stopperich, thank you for everything you have done for me and for allowing me to do the thing I love the most. I cannot thank you both enough for everything. To both of my brothers and my family back home, thank you for your endless support and love. To my aunt, Shannon Cairone, and my sister, Paige Stopperich, you guys have shaped me into the person I am today and have never once given up on me. I thank you for supporting me every time I showed. Thank you both for everything you have done for me throughout my career. Finally, thank you to all the coaches I’ve had over the years – Dan and Darlene Trein, Clint Ainsworth, Searidge Farms, Shayley Beaton, and especially Michael Colvin. Thank you, Michael, for teaching me everything I know and for making me the rider I am today. I couldn’t have done this all without you and cannot thank you enough. Last, but certainly not least, thank you Dodger for taking care of me these last five years and for making all my little girl dreams come true.”

Lauren is quick to credit her husband with all of the support he’s provided over the years. “None of the success Paige, Jillian, and I have had would’ve been remotely possible without the hard work, financial support, and love provided by their dad, Shawn. Although he’s unable to be at many of the shows, he’s always following along from work, while holding down the fort at home. Paige and Jillian also have two brothers. Although they don’t share the same love for horses as their sisters, they’re very proud none the less.”

We’re certain we will be seeing much more from the Stopperich ladies in the coming years.

If you have a special story to share with The Equine Chronicle, email B.Bevis@EquineChronicle.com.