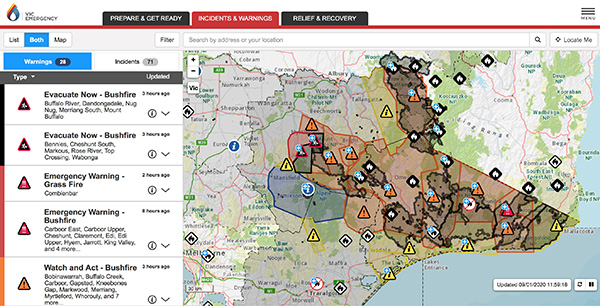 According to various news reports, at least 24 people and millions of animals have perished in the monster fire that currently blazes across Australia. More than 12 million acres have burned; that’s an area the size of Vermont and New Hampshire combined, (Time, 2020).

We spoke with AQHA exhibitor, Lauren Louw, who hails from Australia and often splits her time between the US and Sydney, where she currently lives, to give us a bit more information about the current situation on the ground.

“Australia, although an island, is huge,” she says. ” It’s the same size as the US. The last statistic I heard was that during the California fires a little less than two million acres were on fire. The fire in Australia is at just under 13 million acres. It’s hard to pinpoint where the fires are the worse. It’s so bad everywhere. If you look at a satellite image, the entire east coast is orange and red, and the fires can be seen from space.”

“I think everyone is just so frightened right now. The size of the fires, combined with the fact that our country has been in a three plus year drought is causing people to lose some hope. They don’t think the fires will be out or under control until May, which will be fall for us. Even after that, there are so many towns that are gone and people who have lost everything. It will take a long time to rebuild all that.”

Sadly, Lauren knows of many friends who have lost their homes, barns, and horses to the fires. “I’ve had friends call me frantically saying that the fires have come up so fast that the only thing they could do is to open their gates and cut the fences to give their animals a small chance of outrunning it. When they return, they’re having to identify the remains of retired show horses or kids’ ponies by their distinctive markings.”

Victorian Premier Daniel Andrews extended a State of Disaster for 48 hours as a high bushfire alert is on tap for Friday with favorable conditions for further fire spread. In Victoria, one of Australia’s smallest, but second most populous states, regional organization- Victoria Australia- has outlined specific guidelines for horse owners in the area. While horse owners should allow plenty of time to act if evacuation seems imminent, there are considerations that can be made if animals cannot leave a property.

First, it is not recommended to close horses within stables, unless the barn is located in a very well-protected area. “Horses are likely to receive only minimal burns if given plenty of room to move. They will gallop through flames or around their edges, and stand on the blackened, previously burnt area and remain there until the fire has passed,” says Victoria Australia. Also, do not leave blankets on horses. Synthetic material can melt and metal buckles can burn when exposed to intense heat. Also, stick with leather halters and cotton lead ropes as opposed to synthetic material like nylon. Because horses can move quickly, they will attempt to outrun a blaze. Do not make the mistake of cutting fences, because loose horses can cause accidents, especially in low visibility areas.

If you have to leave horses on a property, it’s important to select a cultivated pasture with little to no vegetation. A large sandy area is best. It shouldn’t be located next to scrub and should have sufficient water for several days.

Once the threat of fire has passed, Victoria Australia has specific tips to ensure that a burned property is safe for horses to enter. Take care to check for hot spots that could flare up without warning. Also, the ground shouldn’t be warm. If the ground is too hot, hooves can be exposed to low grade overheating, which can lead to laminitis. Be on the lookout for ash pits that are caused when the root systems of trees have burned underground. Partially burned trees may look stable, but can collapse and cause injury. Also, ensure that the water supply hasn’t become contaminated.

The list of injuries that a horse can sustain in a fire is long, but the most common are burns to the face, eye injuries, smoke inhalation, hoof damage, cuts, and lacerations. First aid for burns can include cold water dousing or gentle sponging. However, if an animal has intensive burns sustained on up to 50% of their body, a veterinarian should be consulted on the proper course of treatment.

While a horse may seem normal for several hours after the fire, Victoria Australia indicates that may not be the case, because lung damage from smoke inhalation may not present itself for three to four hours, or even several weeks. If an animal suddenly becomes anxious, has an elevated heart rate, and labored breathing, that indicates possible lung damage. Also, if the smoke remains in the air from a sustained blaze, as is the currently the case in Australia, the effects of inhaling particle matter may not be apparent for several weeks.

As indicated above, if the ground is still too hot after a fire, a horse’s hooves may overheat, which can lead to heat-induced laminitis, a condition with poor prognosis for recovery. In addition, the aftermath of a blaze can cause windblown material to pollute the water supply. Look for dark colored water, a bad smell, or thick scum.

Click on the links below for more helpful resources:

Horses and Livestock in Emergencies- http://agriculture.vic.gov.au/agriculture/emergencies/horses-and-livestock-in-emergencies

State Agriculture Relief Commander Sharyn Williams advises all livestock owners to have an evacuation route planned, an emergency medical kit on hand, and to know ahead of time which animals need to be evacuated. “We have seen fires over the past fortnight take a toll on our communities and agriculture. Let’s do all we can to safeguard ourselves and our animals.”

Currently, Agriculture Victoria field staff are visiting properties affected by fires across East Gippsland and Upper Murray. They have confirmed that dairy, beef, and sheep farms have been damaged. Livestock owners can report injuries by calling the Vic Emergency hotline at 1800 226 226, selecting option “0,” and then “4” to speak to an operator. Those in need of emergency food, or who want to donate food, can call the VFF at 1300 882 833 or email fodder@vff.org.au.

What can you do to help? Lauren says that funds donated to the New South Wales Rural Fire Service RFS or Australian Red Cross will go directly towards people fighting the fires and those who have been affected the worst.