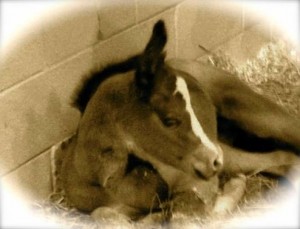 In June 2013, we were saddened to learn of the loss of AQHA World Champion halter horse stallion Mister GQ. Owned and loved by Candace Jussen of Jay Star Ranch, Mister GQ was the 1991 sorrel stallion by Mr. Conclusion and out of Always In Fashion. He sired multiple AQHA World and Congress Champions and winners such as GQ Jezebele, GQ Elle, Passion On Q, A Pretty GQ Mister, Gee Que Silhouette, GQ Solamenty, Forever Showin Off, GQ Best Believe It, Genuine Que, GQ Armani, GQ Champagne Buzz and countless more.

But “GQ” was much more than just a Champion breeding sire and show horse. In 2013, Jussen had this to say about her beloved companion.

“He never once acted like anything but a champion. He taught me so much about horses, people, and the capacity to understand others. I will miss him beyond anything I can explain.”

Just a few days ago, Jussen was shocked to discover that her late friend had planned a little surprise before he left on his journey to that big barn in the sky. Toddling alongside GQ’s constant pasture companion, Abby Essence, was a new foal. 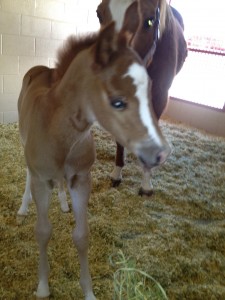 “They were out in the pasture together,” Jussen says. “She was his constant companion. He was 23, and she is 24. They sure showed us a thing or two…”

“Before we lost him last year, apparently he and Abby had plans. What a wonderful surprise he left me.”

A big congratulations goes to Candace Jussen and Jay Star Ranch on this very special foal by Mister GQ and out of Abby Essence.