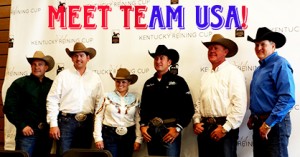 Six riders are now preparing their passports for Normandy, France, after a stellar showing at the 2014 Kentucky Cup Reining Event held during the Rolex Kentucky Three-Day Event at the Kentucky Horse Park in Lexington over the weekend. Over the course of two rides, the top reiners in the country battled it out for the honor to represent the United States in reining at the 2014 Alltech FEI World Equestrian Games (WEG).

Shawn Flarida, riding Spooks Gotta Whiz, a 7-year-old stallion by Spooks Gotta Gun and out of Prettywhizprettydoes, won the CRI3* event with a cumulative score of 452.5. The “man in the green shirt” was untouchable as he claimed his fourth Kentucky Cup Championship. Finishing second was Mandy McCutcheon riding Yellow Jersey, a 10-year-old palomino stallion owned by her dad, Tim McQuay. Jordan Larson riding the buckskin stallion HF Mobster earned the bronze, and Andrea Fappani riding Smoking Whiz rounded out the top four. 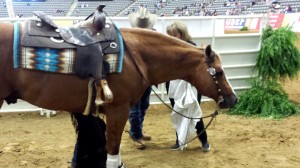 Others chosen for the team included Fappani on Custom Cash Advance, Troy Heikes on Lil Gun Dunit, and Tom McCutcheon on Dun Git A Nicadual.

For Mandy and Heikes, it will be their first foray into the international spotlight, but both are seasoned competitors who are looking forward to the event.

“I’ll go into it just as another horse show,” said Heikes. “You go to horse shows for many years and you learn the psychology of how to prepare yourself, ready your horses, and not let the game beat you, so I’ll approach it like another horse show.”

For Mandy, she’s attended every WEG since reining joined the event in 2002. She attended as a supporter of either her father or husband, but this time she gets to compete, as the first woman on Team USA.

“I don’t really ever look at any of what I accomplish like [I’m the first woman to do this or that]. To me, we’re just competitors, not women and men,” she said. “It’s really fun. I get more nervous when either of them walk in the ring than when I do. This part is fun for me, just to enjoy it with them.” 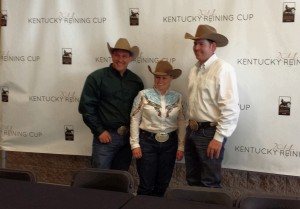 While most of their horses still have to finish out the stallion season, the team will start to prepare for the trip across the ocean by keeping the horses on a conditioning program. “We’ve worked the last couple of years to get here with these horses, so there’s nothing that will distract us from [the WEG],” said Fappani. “From now until Normandy, that’s what we’re working towards.”

The team will learn about the different FEI rules, including riding schedules, team meetings, and more in the coming months, and they hope to be able to scout out the facilities before they ship their horses overseas. The games will take place August 23rd to September 7th, with reining being held August 25-30.

Who’s is the biggest competition for Team USA, a group that has claimed Team Gold ever since the first reining event at the WEG in Juerez, Spain, in 2002?

“Ourselves,” everyone stated in unison. 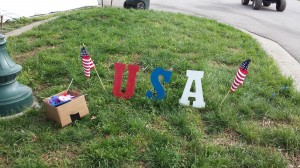