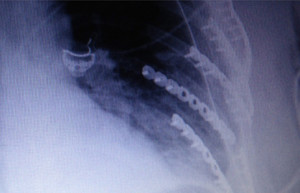 An x-ray of Barbara’s new titanium ribs after the surgery.

Bionic Barbara: ‘We can rebuild her-we have the technology.’

A surgeon at The Royal Liverpool University Hospital used new titanium technology to rebuild the ribcage of a Northwich woman who was trampled by her horse – causing nine ribs to break along with a punctured lung.

Only a handful of hospitals in the country use this latest technology where titanium plates and screws are used to help mend cracked bones. These make it possible for the ribs to heal faster with lower levels of pain for the patient.

This innovative new technique is being carried out by highly skilled orthopaedic surgeons at both the Royal Liverpool University Hospital and Aintree University Hospital – as part of the Cheshire and Mersey Trauma Centre Collaborative. The collaborative – which includes the Walton Centre – provides highly specialist care to patients with life threatening major trauma injuries.

The accident occurred in September 2014, in Willaston, Wirral when Barbara Schofield, an experienced rider fell underneath her horse after the saddle slipped around her four-year-old Dutch gelding. “Figaro” – who stands at 16.2 hands- accidentally trampled her leaving nine broken ribs and six with multiple fractures. The damage also caused air and blood to go between her lung and rib cage which was an additional complication. 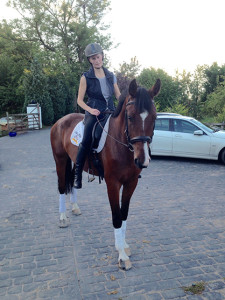 Barbara was quick to jump to Figaro’s defense. Figaro is named after the mischievous black and white cat in Walt Disney’s Pinocchio. “There was no malice at all from Figaro – it was human error and the saddle slipped around and underneath him – it was just one of those things. I’m really lucky to still be here.”

Barbara was taken by ambulance across to the Royal Liverpool University Hospital’s emergency department, where she was immediately cared for by a highly skilled trauma team and orthopaedic surgeons. Reconstruction began using titanium plates and screws. This procedure resulted in an extremely anxious six hour wait for Steve, Barbara’s husband, along with close family and friends.

The Synthes Matrix Rib System – developed in Switzerland – uses a series of curved titanium plates around 10-20 cms long and 10 mm wide. They are sculpted in a factory and fine-tuned by a surgeon to fit the contours of the patient’s ribs.

Barbara remained at the Royal’s intensive care unit for seven days, while Steve drove to and from the hospital twice a day from their Northwich home to visit his injured wife. The trauma collaborative work – across the three hospitals – has led to a reduction in the length of stay a patient requires in the Intensive Care Unit (ICU) by more than four days. Within 10 weeks, Barbara, who works in the NHS as a part-time clinical physiologist in cardiology at Warrington Hospital, was back in the saddle for the first time since the accident attempting to regain her confidence.

Barbara, age 52, said, “I’m delighted with the innovative surgery Sanjay Kalra performed. He has worked wonders and I’m extremely grateful to him as his expertise has resulted in a much more timely and successful recovery. I was very impressed with the whole major trauma team. They were so well organized and efficient.”

“They were all displaying clear name tags with their job roles, which, at the time, was very helpful and reassuring to me. I was frightened and in extreme pain. I had been given morphine to help deal with the pain and was a little confused and anxious about my surroundings.” 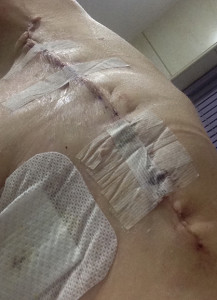 Stiches that run down Barbara’s left side.

“After having an urgent CT scan, I was informed of the severity of my injuries, and chest drains were inserted to allow the air and blood that had collected to be drained. Shortly after my admission to the intensive care unit, an epidural line was inserted by an anaesthetist, Dr Ananth Balasubramaniam. I remember being incredibly grateful for this as it significantly reduced my extreme level of pain. Again, I have nothing but praise for all the dedicated and expert staff who helped to look after me during my stay in intensive care.”

“Earlier, when I was in the ambulance, I recall the crew discussing the latest technology for stabilizing multiple rib fractures they’d recently introduced at the Royal – so that was where I was taken.”

Typically, broken ribs take at least six weeks to heal, but in Barbara’s case it could have taken even longer because of potential complications with multiple breaks on six of the broken ribs.

“I realized that this surgery was quite novel, and I’m lucky to have had this technology and procedure on my doorstep, in Liverpool. I am so fortunate to have been dealt with by such a talented surgical team. It’s been a bit of a joke with friends and colleagues referring to me as ‘barbed wire’ instead of Barbara and also the ‘bionic woman!’ I’ve not been through the security body scanners at an airport yet – they will probably never have seen anything quite like it!

“I have recovered very well indeed. I am still a little hindered by weakness and slight numbness down my left side, due to nerve damage from the accident, but I am feeling confident that this will reduce with time and the help of physiotherapy at my local hospital.” 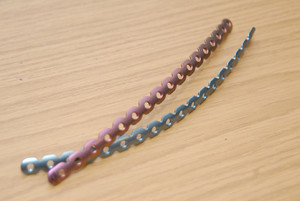 Mr. Sanjay Kalra, consultant trauma and orthopaedic surgeon, said, “The pain of multiple broken ribs is excruciating so patients naturally try not to move around much. Because taking deep breaths and coughing is painful, there’s an increased risk of pneumonia because phlegm can build up within the lungs and can often become infected.”

“With this technology, the procedure we use not only reduces the risk of complications but encourages a faster return to normal function. It is only recommended for patients who have suffered severe chest trauma with multiple broken ribs. The results and patient outcomes have been excellent for patients like Barbara at the both the Royal and Aintree hospitals.”

Barbara is now riding again and carefully re-building her confidence. The bond is growing stronger than ever with her horse Figaro. 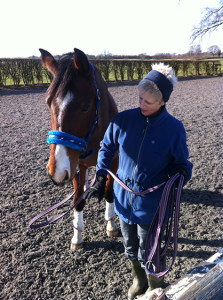 Barbara with Figaro after the accident.