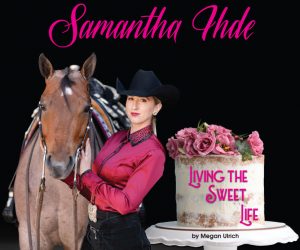 Samantha Ihde thought it was a cruel joke. As she was working through the busy holiday season as a catering chef and bakery owner, her mom, Kelly, was watching classes at the AQHA World Show. Samantha was more than a little jealous to be missing it. In a rare moment of down time, she sent her mom a text, “Like any horses in the Junior Western Riding?” The response came quickly. “Blake Weis’s roan.”

Cool Cruzen Lady, the mare to which Kelly was referring, had won the class the previous year and set a world record in the event with a score of 232. Samantha was sure her mom, who has a soft spot for roans, wasn’t aware of the horse’s reputation. Samantha had planned to join her mom in Oklahoma City within a few days. She set the thought, and her phone, aside to carry on with her work week.

But while Samantha was busy at work, her trainer, Tonya Brown, and Kelly were doing some no-joking investigation into the five-year-old roan mare named Hazel. Without Samantha’s knowledge, the pair learned Hazel was indeed for sale. Tonya took her for a test ride the day before Samantha was set to arrive in Oklahoma. Back at work, Samantha’s phone alerted her to a new message. This one was a video of Tonya waving at the camera as she cruised around on Hazel. Samantha skipped a text message response. This warranted a phone call.

“I was still thinking this was just some joke on me and that there was no possible way Hazel, a two-time World Champion, would be for sale. Even if she was, I couldn’t believe that I would be lucky enough to own such an amazing horse,” Samantha says. 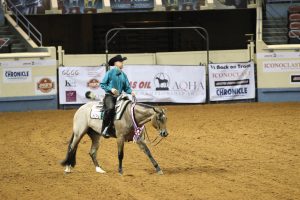 By the time Samantha arrived at the show, both her mother and Tonya had fallen in love with Hazel. Samantha wouldn’t be far behind. “She was so sweet and just gorgeous. I rode her and was blown away by her talent, and it was a done deal. I’m still in utter shock about the whole situation. I can’t thank Blake and Kendra Weis and former owner, Jane Humes, enough. Selling Hazel to me made my dreams come true,” Samantha says.
Cool Cruzen Lady is by VS Flatline and out of Suddenly A Cool Lady. At that show, she improved upon her prior year’s world record-setting performance by scoring a 235 in Western Riding.

Weis’s trailer was one horse lighter on the way home from Oklahoma as Hazel went directly to Tonya’s barn in Escondido, California. There, she joined Samantha’s other two horses, Moonlit Hotrodder, who she shows in Amateur Western Pleasure, and He’s The Candyman, who she will soon be showing in Western Pleasure and Horsemanship. Samantha has been showing in Novice Western Riding for the past two years and debuted in February with Hazel in Amateur Western Riding.

Though she’s been a regular in the show pen since she was 11 years old, competing in Western Riding is relatively new for 25-year-old Samantha. As she began trying her hand at the event in recent years, she had been using her mom’s gelding, Call Me Interested, aka “Levi.” He helped her fall in love with the new challenges Western Riding offered. But, because Levi is aging, and Kelly continues to use him as her own show horse in Novice Select Horsemanship, Samantha didn’t want to put additional stress on him, so she stopped showing him. “I was really bummed because it was becoming my new favorite event, and I was without a horse to show,” she recalls. Hence, the search that would lead her to Hazel. 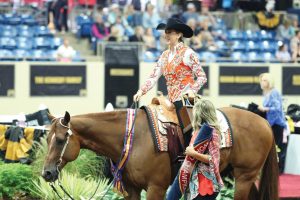 “I’ve been showing Western Pleasure for my whole career, and so the Western Riding was fun for me because it was a little bit of a faster pace. You have to give up a little bit of control and trust your horse in that event. It’s a lot more difficult than it looks!” Samantha says.

As she begins to set goals for herself and Hazel, Samantha emphasizes that building a relationship with Hazel is a priority for her. “Everyone’s goal is to win the World. I just want to have a bond with my horse where she trusts me and I trust her, and we have the best go possible each time we show. Winning is just the icing on the cake,” Samantha says. “I’m also looking forward to getting stronger in Trail. I look forward to learning more of the all-around events. I just played around in Trail and Western Riding in the past, so I’m looking forward to actually learning and competing in those events because Hazel is really good at them, and I’m sure she will teach me a lot!”

Already, the pair is having great success. At just their second show together, they won the NSBA Riders Cup in Non-Pro Western Riding at the 2019 Sun Circuit in Scottsdale. Despite her obvious talent in the show pen, Hazel has impressed Samantha with her kind soul and her happy personality. “She just wants attention and cookies… lots and lots of cookies,” Samantha says. “On top of that, she’s just so gifted. She’s built so correct and she’s beautiful. She’s also so natural when she moves. It’s just really easy for her.” This may be a trait passed down from her grandmother, Vital Signs Are Good. One of Hazel’s quirks–that Samantha still gets a laugh out of–is her habit of vocalizing her excitement about feeding time. When she gets fed, she whinnies or nickers, but rather than sounding like the well-mannered mare she is, you’d swear the sounds she makes are coming from a stud. It takes everyone around her by surprise.” 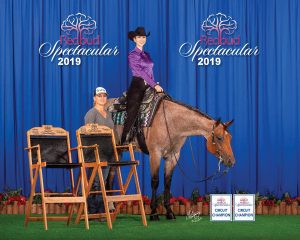 Samantha got her start in the horse industry at just three years old. Her grandpa, Charlie, had a horse with Kathy Holman at Ortega Equestrian Center, and he purchased riding lessons for both Samantha and Kelly. Both were bitten hard with the horse bug immediately. Samantha began showing in small AQHA shows as a youth under the guidance of Ashlee Averill. Her grandpa Charlie and her first walk-trot horse, also named Charlie, inspired the name of Samantha’s bakery, Charlie and Me Bakery.
For the past five years, Samantha has been training with Tonya Brown. During this time, she’s also graduated from culinary school, secured her job, and opened her bakery. She draws many parallels between her professional life and her horse life. She says, “In both my career and my hobby, I have to be very dedicated and willing to learn. There is always room for improvement. Cooking and showing horses are very unpredictable. You have to react fast and always be on your toes!” Samantha has made designer cookies for a wide array of customers, including many in the equine world. Some of her favorite creations have included those she’s made for horse shows and even The Equine Chronicle. 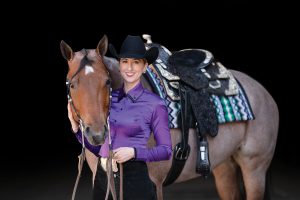 Tonya has been a great supporter of Samantha during this time and has encouraged her to continue chasing her dreams and driven her to compete at a higher level than ever before in the show pen. “Tonya has given me such confidence and has pushed me and supported me in more ways than I can count! I wouldn’t be here at this level with this amazing horse without her. She has helped make my dreams come to life,” Samantha says.

Because of Tonya’s encouragement and Samantha’s drive to succeed, she has had many impressive accomplishments. The one she is most proud of is winning back to back Maturity Limited Non-Pro Western Pleasure Campionships at the NSBA World Show in 2017 and 2018 aboard Moonlit Hotrodder.
In addition to her Western Riding successes, Cool Cruzen Lady also has a long list of other achievements that began when she was top five in the Congress Masters 2-Year-Old Western Pleasure in 2016. She was the 2017 Congress Green Western Riding Champion, 2018 Congress 4 -and 5-Year-Old Trail champion, and has been a money earner in multiple events in NSBA.

It’s safe to say Samantha and Hazel will be adding many more accolades to their collection. And that’s no joke.