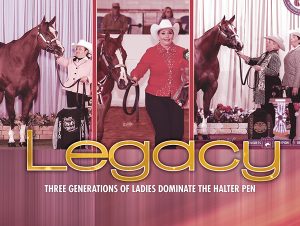 It’s often been said that family is the backbone of society and, in essence, what really matters in the world. Young equestrian McKenna Gibson has already learned the value of family due, in part, to the gift of the love of Halter horses from her grandmother, Carolyn Stewart, who she lovingly calls “Mamaw,” and from her mom, Cara McMillian-Gibson.

When talking about competing with her show string, including her first show horse–the late AQHA/PtHA mare Candys Mirror Image–or her latest show prospect, yearling filly Rose A All Day, McKenna says, “It’s really fun, because I feel great when I’m in the show pen, and I can learn so much from my mamaw and mom at the same time.” She explains that showing is fun to begin with, but having her family be part of it makes it that much better. “I feel like I’m born to do it,” she reveals.

‘Mamaw’ or Carolyn Stewart likely didn’t intend to create a legacy when she started working for her dad in his oil office in Tulsa and earned enough money to buy her first registered Quarter Horse in 1970. But that’s how it started, especially when her cattle-raising dad, who doubted a horse’s value, watched her show the mare, breed her to the stallion, Speculator, and sell her beautiful, black colt for $5,000. “Back then, it was a great amount of money for a young horse, and Dad was thrilled,” Carolyn says. “We ended up buying Speculator, and I kept on breeding and raising colts.”

Her stint as a 48-year AQHA consecutive breeder began with Rocking M Ranch in Ramona, Oklahoma. She purchased more broodmares and made the addition of AQHA stallion Skip Light Lee. Of course, being the goal-setter she is, Carolyn has her sights set on a celebrated 50-year AQHA breeder designation. “It took forever to get Skip Light Lee bought, and we had him until he was 24 when he passed here on the ranch,” she says. “He sired both Halter and Pleasure types.”

Carolyn’s breeding repertoire is vast, and it includes champion stallions such as Adonnis, the 1996 AQHA stallion, who won multiple titles for Cara in 2002. It also includes AQHA mare Skip Light Trouble, a favorite of Carolyn’s. Together, Carolyn and Carol Rose partnered on the mare’s baby in the late ‘80s to great success. “She raised a gorgeous stud colt, Zans Last Light, which was one of the last stud colts sired by Zan Parr Bar,” Carolyn said. Bobby Lewis won Junior Calf Roping on Zans Last Light and was fourth in Junior Heading at the 1991 AQHA World Show and was runner up for Super Horse that year. The stud sold for $100K afterward, but he eventually came back to Rocking M Ranch to stand and to live out the rest of his days.

Carolyn took over all the showing of the ranch’s offspring after her divorce in 1981. It was an expansion of her former role of breeding, raising, and fitting the horses. “I got to where I was pretty darn good at it!” exclaims the spunky horsewoman who once served as the first woman President of the Oklahoma Quarter Horse Association and as an AQHA National Director.

“The Select World had started up in 2003, and the second year of the show everyone was bugging me to go,” quips Carolyn. Urging from others including her trainer, Jerry Wells, as well as her daughter, Cara, finally convinced her. She showed her 2001 AQHA stallion at the time, Perpetuality, plus two babies that were both sired by Adonnis.

“They’d only been here at Jerry’s place and my place, so they hadn’t been shown, but we took them both out there,” Carolyn explains. “I got them shown, and took Reserve World Champion with both babies, and I told Jerry I got them both broke for you now, so don’t screw them up.”