Josh & Kaleena Weakly – Secret to Showing With Your Kids 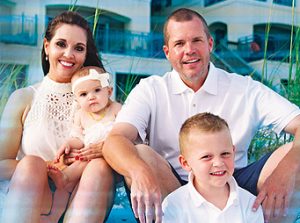 Josh and Kaleena Weakly of Shelbyville, Illinois, are a dynamic young couple that has hauled home a hefty number of golden globes, cups, and trophies over the years. In 2014, their son Jax was born. In June 2017, little Knox Everlee became the next Weakly member to be seen ringside. The young children have had an influence on the family’s show schedule and have reshaped their priorities. Yet, they forge ahead with verve to embrace a life where their children can grow up in the horse show world.

Josh has had great success in the Halter pen with multiple World Champions like PF Supreme Surprise, Legacee, and Its Gameday. He also has won the AQHA World Show Leading Owner Award. He has always been the type of handler to show a couple of times a year and get qualified for the big shows in the fall. On the other hand, Kaleena would show all the time if she could. She unabashedly admits to her showing addiction. She says, “I love all-around competition. I love hauling for High Point. In a perfect world, if I didn’t have to work, I would go every weekend!” During her show career she’s picked up Congress Championships, World Championships, three AQHA All Around Amateur titles, and NSBA titles. Her growing family has shifted her priorities, but it certainly has not eliminated showing from her psyche. Kaleena compares her horse show schedule before and after the birth of her children. “I don’t have the need to go every weekend anymore,” she says. “Now, I’m totally satisfied going once every six weeks, or every month.” Upon more serious reflection, she acknowledges that a mix of age and parenthood has reshaped her outlook on life. “I’m a lot more satisfied now and more mature in that I don’t have to go. I want to stay home with the kids. We enjoy being home as a family.”

This approach has made her a little pickier about which shows she attends. She says, “I try to make the shows we go to count as much as possible. If the horses are competitive, I want to go to shows that are large where we can get points. We go to the Sun Circuit to get seen on the West Coast because I think it’s important to do that.” She also implements a strategy of picking
shows where she knows there will be great Trail patterns. Distance is a factor, too, so she hits some shows closer to home. “With the littlest one, a six-hour drive is a lot better than a drive that’s over eight hours,” she says.