Joaquin Delón – Enthusiasm for the Halter Horse Across the Border

March 8, 2014 | Filed under: Current Articles,Editorial,Featured | Posted by: Alex A. 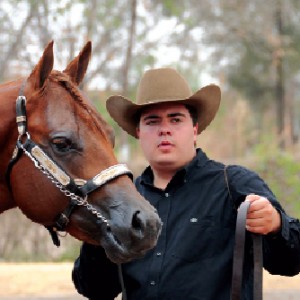 If he’s not working in the barn with one of his own horses, you can find him reading industry magazines, surfing Facebook and the Internet, and doing anything to learn more about the horses, people, and the discipline he loves. “He studies horses, period,” says Wayne Halvorson. “He doesn’t like anything else.”

Born in McAllen, Texas, but having grown up in a picturesque colonial town in southern Mexico, Delón always loved horses, even though no one else in his family did. “I would be attending soccer camp and, if I saw a horse, I’d wander off from camp to go see the horses,” Delón recalls.

While spending a year in Dublin, Ireland in 2005, studying English at a Catholic school, the now 21 year-old was able to ride horses every day. “My mom would ask me for pictures, and I’d just send her pictures of the horses I would ride,” he laughs.

After attending a horse show in his home state of Teziutián, Puebla, Mexico, Delón was immediately hooked. The heavy musculature and beauty of the halter horses caught his eye, and the discipline became his passion. 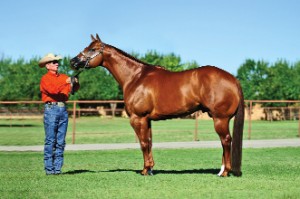 Delón met his business partner, Filemón Acoltzi, in 2010 because they both shared a love for halter horses. Acoltzi purchased a Sir Cool Skip stallion that Delón owned, named Cool Clus, and from then on the two started partnering on halter horses.

Even though he didn’t grow up horse crazy like Delón, Acoltzi dove headfirst into the industry when the university he was working for started a riding program and he had to start buying horses for the program. When he attended Mexico’s largest horse show and fair, he bought a mare named CK Tama. He showed her the next day and she won Grand Champion in halter. “I was hooked,” Acoltzi says.

In 2010, the two partnered on JMK Hyperbole. That year, the stallion won the National Highpoint award for two year-olds in Mexico, as well as the three year-old title in 2011. It was the start of a perfect partnership.

Delón acts as Acoltzi’s interpreter for most transactions. The two men work as a team with AQHA Professional Horsemen and halter trainers Ted Turner and Wayne Halvorson.

How did this pair hook up with the halter greats? At a horse show, of course. At the last show of the year, Delón wanted the best-of-the-best to show their horses. Knowing the top handlers from his studies, Delón called Turner and Halvorson to ask if they’d come show the pair’s horses. They both agreed and won Grand Champion Stallion, Grand Champion Mare, and Champion of Champions for Delón and Acoltzi.

Turner had gone down to Mexico to show a few times in the past and met Delón about four years ago. “I was fortunate enough to go to his parents’ house, and I met his whole family,” Turner says. “That was very positive. He has a great family and a great upbringing. They’re just very, very nice, classy people.”
In 2011, Delón and Acoltzi purchased Im Self Employed (Self Employed x Forever Showin Off) and sent the colt to Turner for the Futurity in Iowa and the AQHA World Show. The weanling stallion went on to earn third place and the partners’ first World Show trophy, with Turner. “We were really excited,” recalls Delón.

In 2011, Delón was able to bring home his first gold trophy from the AQHA World Show when Turner showed Secrets of a Legend in Two Year-Old Stallions. The win was extra special for Delón because he chose the stallion when he first saw him in Turner’s barn. “Ted did a great job with him,” recalls Delón.

Culture Shock: Showing in Mexico Versus the United States

When you think of horses and their connection with Mexico, the first image that might come to mind is the vaquero, or the Mexican cowboy. Historically, Mexican cowboys held contests among themselves to show off their ranching skills such as bronc riding and roping. After being introduced to cattle and horses by the Spanish conquistadors, vaqueros developed the skills of roping, branding, and rounding up cattle for the growing cattle ranches across Mexico. Today, vaqueros still train and compete at big events to vie for national titles.

However, the halter industry in Mexico is vastly different than the romanticized images of the vaquero. Most Quarter Horse shows in Mexico only have halter and possibly reining, with very few other classes. Halvorson has attended approximately 15 shows in Mexico, and he relished the experience each time.
“The numbers at the shows are good, and people are really enthused about the halter industry,” Halvorson says. “When they come to the show, they’re not in any big hurry to get the show started in the morning. We figured that out!”

“They put a lot more promotion into their halter classes than we do in the states, yet they don’t have performance classes with them, so they generally have plenty of time to do it.”

Horse shows in Mexico are held in conjunction with events similar to state fairs in the United States. Because of the events surrounding the horse shows, there can be up to 2,000 to 3,000 people in the stands watching the show, not including the special section reserved for owners and exhibitors to sit. Every show has an after-show party where exhibitors and owners of the horses get together to celebrate.

“It’s exciting to have that many people cheering when you lead the horse by. They’re really interested and they really support the horse show,” Halvorson says.

After experiencing the AQHA World Show, Delón noticed that there are more quality horses in the United States than in Mexico. He wants to continue working to help improve the Mexican horse industry in every way. That’s why Delón and Acoltzi love working with the likes of Turner and Halvorson.
After initially meeting Halvorson in Mexico, Delón was invited to stay at the Halvorson Ranch in Guthrie, Oklahoma, to learn more about halter horses and competition. In February 2011, Delón took him up on the generous offer and stayed with the Halvorson family for two months. Delón started renting a house from the family in June 2012 so he can show more and become more involved in the horse business in the United States.

“Joaquin has always been very eager to learn,” Halvorson says. “Going down the road to horse shows and such, he continuously asks questions on all the horses and all the people in the industry. He’s always had a real desire to know what’s going on. His desire to see the horses and meet the people has been tremendous. When we’ve taken him to the AQHA Convention, AQHA World Show, the Congress, and the Breeders’ Futurity, we introduce him to a lot of the people he has met on Facebook. For him to have the opportunity to meet these people in person… he’s been really excited about that.” 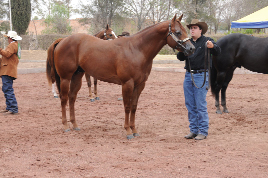 Turner still goes down to Mexico every once in a while to compete and to work with Delón and Acoltzi. “The experience of going down there has been nothing but positive,” Turner says. “The people treated us great, and the facilities were great. It was a very positive experience, and I credit a lot of that to Joaquin because of the people he knows and is associated with.”

Because they speak only a little Spanish, both Turner and Halvorson use Delón as a translator when they do business in Mexico.

Delón and Acoltzi keep about 60 horses in Mexico. Ten of those horses are typically breeding stallions and 15-20 are show horses. The rest are yearlings and broodmares. Turner Ranch generally has three to five horses, and Halvorson Ranch can have two to ten horses at a time.

“I think Joaquin is going to be a name that we hear in the horse business, specifically the halter business, for a long time because of his desire to continuously increase his knowledge about Quarter Horses and Paint horses,” Halvorson says. “He wants to be a better competitor in the show ring, so he’s continuously looking at the styles of clothing, the halters that we use, and how we can better fit and condition the horses to make them more presentable in the show ring. I would say he has a real desire to show quality horses and a big desire to buy and trade at the top end of the halter industry.”

Delón wants to use his expanding knowledge to help the Quarter Horse industry in Mexico and to take the enthusiasm at the horse shows and expand it to the farms. “I would like to see the quality of horses get better, as well as the breeding operations,” Delón says. “I would also like to see more people get involved with showing halter horses in Mexico.”