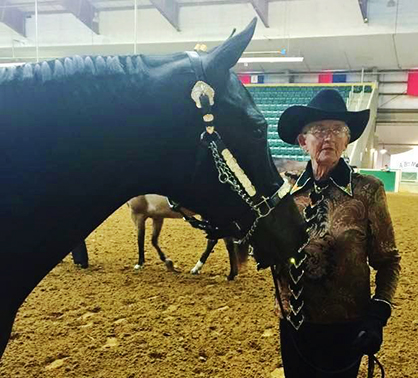 Mrs. Dorothy and Calla preparing for their Showmanship class at the 2015 Martinganza. Photo courtesy of Kennie Williams.

“There’s a lot to learn; when you stop learning, you might just as well quit,” Grimes says. “I learned an awful lot about showing Quarter Horses [this weekend]. There’s still more that I need to learn to make it perfect, but that’s something I can work towards.”

Grimes, who turns 73 this August, competed at her first AQHA show last weekend at the 2015 Martinganza in Williamston, North Carolina. With some encouragement from her youngest daughter, Kennie Williams, Grimes was introduced to an entirely new set of classes.

“My daughter asked me if I was going to show,” Grimes says. “I said, ‘Well, ok. I can do Showmanship, but I don’t want to be with the little kids.’ She said, ‘Mom, they have classes for older people too.’ I said, ‘Good, let’s go; I haven’t shown in years.’ So she started scrambling around getting all of my stuff together.”

“I’ve never showed in Showmanship or Halter. I’ve always showed Arabians or Thoroughbreds. This was the first Quarter Horse show I’ve been to in my life, and it was wonderful. I was very excited, but I wasn’t nervous until I got in the show pen! I just tried to remember how to make my old [brain] remember the pattern! My sweet mare was very cooperative.”

Grimes’ partner for the show was a beautiful 2008 mare named StarmansLopin Leaguer, aka “Calla.”

“She was a horse at my daughter’s stable, but she wasn’t suitable for the young girl [who owned her.] I looked at that mare and she was such a pretty mare… I said, ‘I need a horse like I need a whole in the head, but I’ll take her.’ They purchased a Hunter pony, and I got the Quarter Horse mare.”

Although Grimes is new to the AQHA show scene, she is a lifelong equestrienne. She remembers the exact day, nearly 61 years ago, when she received her very first horse.

“I’ve loved horses since I was a 4-year-old,” she says. “My great-uncle put me up on his big old workhorse, ‘Grey Boy,’ and I never forgot it. Being put up there on a horse was the most wonderful thing in my life.” 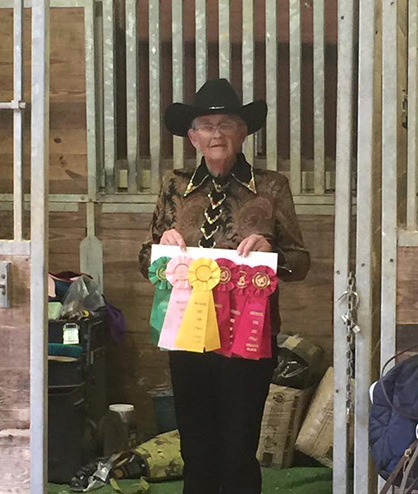 “My parents lived in the city and my grandparents lived in the country, so I was always begging and pleading for ponies. When I was almost 13, on May 28, 1954, I got my first horse. From there I wanted to know more and more, so I dedicated all those years to it. I ended up breaking, training, and riding horses. When I found out I couldn’t do it like I used to anymore, my youngest started, and I retired out of it.”

Thanks to a tricky hip and a few ailing joints, Grimes doesn’t ride anymore. However, there is no question that horses continue to play a big part in her life.

“I will always have horses as long as I live, even if I can’t but just sit out on the porch and watch them,” she says. “I tell my friends, when they’re needing a horse fix, to just come on out. It will be just a bunch of old folks, sitting out under the trees, watching horses, and just talking about the good ole days.”

“I’ve got a lot of old horse friends, who can’t do it anymore, and they said it was just inspiring to see me get out there. A lot of older people can get depressed. I went through that in my 60s, when I couldn’t do what I used to do all day long. You’ve got to love it, because it’s a lot of hard work… getting into the mind and heart of your horse.”

For Grimes, in-hand classes like Showmanship and Halter provide the perfect solution for the more seasoned equestrian who still wants to be involved in the sport, but may have some physical limitations.

“I would encourage old horse people that you can still get out there and just walk, even if it’s just a shuffle! I loved it, because with my hip and all my joints, it’s hard to get on and off and ride. When you can handle them on the ground and work with them, I think it’s excellent for older people. It’s an incentive.”

“I thoroughly enjoyed it. It was a perfect weekend. The next show will give me something to look forward to. The show people were great, and the ring crew was really nice.”

Grimes does admit there is a learning curve that comes into play when you return to the show pen after a decade or two. A little misunderstanding in one of her Showmanship classes at Martinganza made for a unique learning experience.

“In my Showmanship class, I was thinking back to my younger days and I got a little confused,” she says. “I had my pattern down perfect. At the last part, I was thinking that I did something wrong because the judge nodded at me. I thought I was dismissed. I walked away. I didn’t know he was giving me the signal to set up my horse!”

Despite the initial miscommunication in her first class, Grimes then returned to the pen for Halter and earned a slew of second, third, fourth, and fifth place ribbons. Now that she’s had a taste of show ring success, we wondered if we might be seeing Grimes back in the arena at a show in the future. Here’s what she had to say…

“My daughter said they’re having a show this summer in August. I said, ‘Honey, to an old person, August is a long way away.’ I take each day as it comes and thank the good Lord for it. If it’s not too hot and I’m feeling up to it, I will go again because I thoroughly enjoyed it.”

After her daughter posted pictures from the horse show on Facebook, Grimes received numerous comments touting her as being as inspiration for all generations. She’s not quite sure about all that. Still, Grimes is thankful for the support and would like to take a moment to share one final message.

“People have said, ‘If you can do it Dorothy, I can do it.’ I would tell them that somebody out there has got a horse you can take to a horse show and enjoy yourself with, even if you just want to show in Halter. Just lead them in and make sure they’re standing up square. It’s a whole lot quieter with a Quarter Horse; you don’t have to jump! If you have the love for it, don’t give it up.”

“God willing, I will be in the show ring again.”