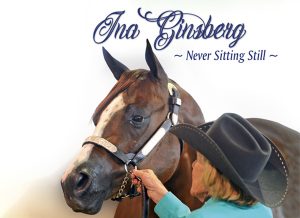 Ina Ginsberg was nine years old when she first sat in a saddle at a summer camp. Prior to that, the only animal experience she had growing up in Massachusetts was caring for the two goldfish she kept outside as pets. “I never did figure out what happened to them during the winter,” she jokes. The self-described tall, gangly kid had no luck with any of the other camp activities. “I found the only thing I could do was ride a horse!”

And that’s how the passion that has spanned nearly eighty years and earned her 13 Amateur High Points and two AQHA Select World Championships began. Ina wouldn’t own her own horse for many years following that summer camp. By then, she had attended Skidmore College in New York, had gotten married to her late husband, Arnold, and had a son, Allen. When he was school age, the Ginsbergs realized Allen struggled with dyslexia. Experts at his school thought riding horses would be good for him. “I wasn’t going to send him out to ride all alone; I went along and–a year later–I had a horse and trailer,” Ina recalls. The horse was a Thoroughbred named Odyssey.

From that point forward, Ina has had her hands in pretty much every aspect of the industry. As a youngster, Allen enjoyed riding at the time Ina was involved in Fox Hunting. She’d ask someone to ride toward the back with him and they had clear instructions: “Don’t tell me anything unless an ambulance comes.” Odyssey was not the most trustworthy mount; in fact, he could buck and run off with the best of them. At one point, the gelding had sent Ina off hard enough to break her helmet–and that happened three times in just one month–but he helped her learn to ride the hard way.

Around the same time, she began breeding, raising and training Cocker Spaniels. She bought her first eight-week-old puppy for just $50 in 1956. Over 50 years of breeding Spaniels, she estimates to have bred more than 100 champions, bringing much renown and success to her Juniper Kennels. She was also an official of the American Cocker Spaniel Club and a president, vice president and judge for many canine associations. It was the taste of competition in the canine world that caused the next domino to fall in Ina’s experiences with horses.