In Loving Memory of Cracking The Code 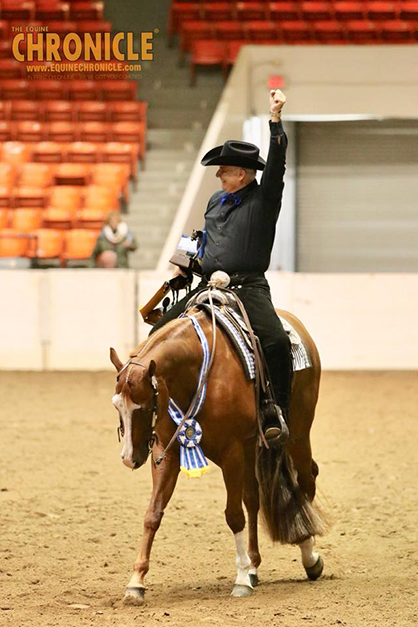 We sincerely regret having to relay the news that multiple Congress and AQHA World Champion gelding, Cracking The Code, was laid to rest earlier this week.

Dan Yeager was the loving owner of the eight-year-old gelding he called “Pistol” for the past five years. Dan and Pistol first began their journey in 3-year-old Western Pleasure futurity events with Kenny and Ashley Lakins; but, with Dan’s background as a seasoned all-around exhibitor, it was only a matter of time before Pistol was introduced to new events.

“I typically only have one horse at a time; but, for some reason, I bought Pistol while I still had my old horse, Cee Money,” Dan says. “I started riding Pistol with the Lakins as a three-year-old in Western Pleasure futurities. Then, when he turned four, after the Congress, we brought him to Highpoint and started working on his all-around events. When Cee Money had to be put down, it was nice to have Pistol to help ease the pain.”

Pistol not only helped Dan through that tough time in his life, during the short time they spent together, they accrued numerous accolades and titles. One of Dan’s fondest memories was when they were named World Champions, a first for both, in Horsemanship at the Select World Show. “I’d never been able to win a class at the World Show before, and when he was a five-year-old, we were Reserve in Horsemanship. Then, the next year, we won.” Dan and Pistol continued their winning ways at the World Show over the years achieving two Reserve World Championships and two World Championships as a team. 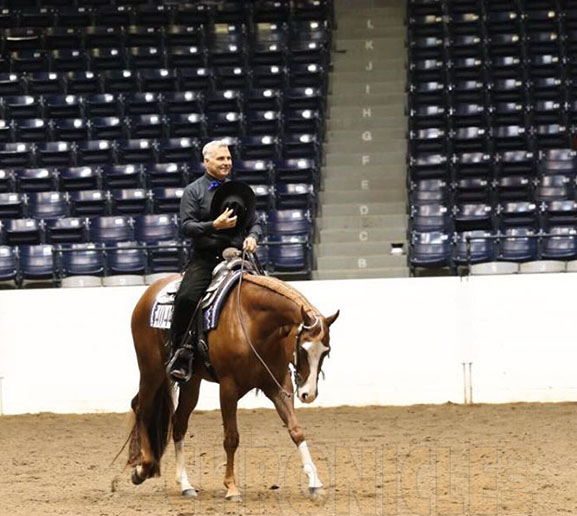 Another special moment took place at the 2016 Quarter Horse Congress, when a then very green Pistol helped Dan win Select Horsemanship. “I’d won Select Horsemanship with Money in 2015, In 2016, Pistol was only four years old, very green, and didn’t have a flying lead change, so I’d actually decided not to go. But Jason and Charlie said that of course I should go. Although my horse was very green at the time, they thought I should go and have fun. My expectation was certainly not to win the class, but he stepped up. We became partners, and we won in 2016, 2017, and 2018. In 2017, we won Select All-Around at the Congress doing Showmanship, Horsemanship, and Western Pleasure.”

While Dan and Pistol both loved competing in their favorite class of Horsemanship, it took a little convincing to get the quiet gelding to pep up enough for Showmanship.

“Showmanship was probably his least favorite class, but we ended up being Congress Champions and Reserve World Champions in it. He would do it, but he always liked to get it out of the way so we could go do something more fun! He was always good. Never one time that I showed him did he cheat. I’d never had a horse like that before.”

“Luckily, for me, Horsemanship is a class I want to do well in, and he was really good in that class. He was also very talented in Trail. Charlie and I were so surprised at how quickly he adapted to Horsemanship. I think that was because he excelled at all the different maneuver Horsemanship requires. Still, it was amazing at how quickly he took to it. We just started doing Trail and Western Riding last year.”

Dan describes Pistol as a quite and disciplined soul with a kind heart and constant willingness to please. “He was very attentive. When I would come to the barn and yell his name, he would pop his head out and look at me with his ears up. He was always a happy horse. I think that’s part of the reason why he was so successful in the show pen.”

Sadly, Pistol sustained an injury in his stall and had to be euthanized earlier this week. While Dan was hopeful he might be able to be healthy enough to live a pain free life in the pasture, his vet indicated that wasn’t an option, so he had to do what was best for his beloved friend.

“I’ve had so many horses over the years, and this is the one that really stole my heart. He was kind of a freak of nature.”

Our sincerest condolences to Dan following the lost of Pistol. May the many good memories of time spent together help to provide some solace during this difficult time.

Click on the links below to view interviews with Dan about Pistol over the years.