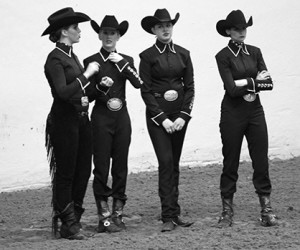 Could Collegiate Equestrian be a thing of the past?

AQHA and its alliance and industry partners clarify the developments with the National Collegiate Equestrian Association.

AMARILLO, TEXAS, October 15, 2014 — The American Quarter Horse Association and its alliance and industry partners are aware of and are watching closely the developments regarding the National Collegiate Athletics Association’s Committee on Women’s Athletics recommendation to remove equestrian from the list of emerging sports, as well as Kansas State University Athletics’ decision this week to drop its sponsorship of equestrian.

Originally when the NCAA developed the emerging-sports model, there was a 10-year window for a sport to reach championship status. Equestrian, which was formally recognized as an emerging sport in 2002, had seen enough growth in school numbers within that 10-year window, that NCAA granted extensions even though a 40-school minimum had not been obtained.

Earlier this summer, the CWA requested a strategic plan from the National Collegiate Equestrian Association on how equestrian planned on seeing growth in sponsoring schools.

The equestrian strategic plan was built and provided to the CWA for review at its September meeting. Following this meeting, with no further discussion of the strategic plan, the CWA provided a letter to the NCEA on September 30, 2014, informing of their committees’ vote to recommend removal of equestrian from the emerging-sport list. On October 13, K-State Athletics announced it was dropping its sponsorship of equestrian, effective at the conclusion of the 2015-16 season, a decision that was made before the CWA recommendation had been fully reviewed and approved by the various NCAA governance bodies.

Our current understanding of the timeline within NCAA for the review of the CWA recommendations is as follows:

o October 30 – NCAA Board of Directors

We are continuing to solicit information regarding the actual timeline. Everything is evolving, and as information comes, we will keep the industry informed at www.aqha.com/ncea.

This recommendation by the CWA will have implications both immediately and in the future. The first to feel the impact will be the approximately 1,000 student-athletes who currently compete in NCEA. These young women have invested inestimable amounts of time and money into training for their collegiate careers and now this could be taken away.

The effect will be felt by thousands of young female potential student-athletes currently participating in the industry who have concentrated so much of their training and based their academic and competitive decisions on the hope that one day they too may compete at the highest level for their favorite university. All of that could be taken away based on the recommendation of one committee.

The colleges and universities that sponsor collegiate equestrian have invested millions of dollars in all areas of their programs to provide their student-athletes with an atmosphere where they can be academically and athletically successful.

Each of these implications is detrimental when taken individually, but collectively they become even more unfortunate for the horse industry as a whole.

“The NCAA is charged with governing collegiate athletics and no doubt the CWA members acted in accordance with established guidelines. While we cannot fault the CWA for following protocol, we can indeed send a message to the NCAA that the sport of equestrian is united and we intend to take whatever steps are necessary to prove the worth of equestrian as a viable sports opportunities option for young women,” said AQHA Executive Vice President Don Treadway Jr.

The industry coalition is aware that many individuals are interested in this development and appreciates your concern. Please stay tuned for further updates and any possible calls to action that may be needed to support this cause.