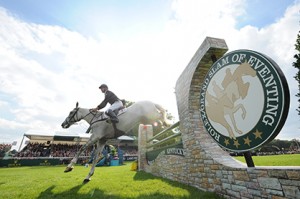 As the winner of the 2014 Land Rover Burghley Horse Trials, Andrew Nicholson is now the new ‘live contender’ for the prestigious Rolex Grand Slam of Eventing accolade. Nicholson will now target the Rolex Kentucky Three-Day Event and try and win the next stage of the three leg phase to become the second ever rider to have won this exceptional award.

With just 12 clear rounds from the 39 riders that started the final show jumping phase, Nicholson entered the arena knowing he needed a good performance in order to be crowned the Land Rover Burghley Horse Trials victor and become the new Rolex Grand Slam of Eventing ‘live contender’.

Despite the perfect weather conditions and good ground, the 580 meter course, created by acclaimed Course Designer Richard Jeffrey, proved tricky for the morning’s competitors, after yesterday’s adrenaline-charged cross-country course with only three clear rounds between them. In the afternoon session, Jonathan Paget produced a faultless round putting the pressure on Sam Griffiths. A few unlucky touches resulted in eight faults for the Badminton winner, knocking him into third place and allowing Paget to move into second.

The atmosphere was tense with silence falling amongst the crowd for Nicholson’s round. Avebury was looking full of energy as they entered the ring, 13 jumps away from making history and becoming the first horse and rider combination to win the Land Rover Burghley Horse Trials consecutively over three years. The packed grandstands went wild as the established partnership neatly jumped over the final double, producing a clear round and claiming victory at Burghley once more. 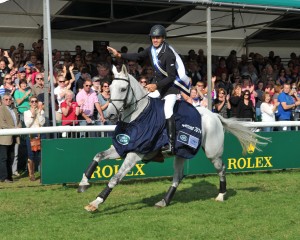 Andrew Nicholson riding Avebury: “I didn’t feel that cool during that, I can tell you. He’s a good jumper; he’s been there and done it all. I don’t have to worry about him getting nervous with all the people; I just have to keep calm and ride him like I normally ride him. It’s a big team effort when you have a horse like this who has now won this three times in a row. They’re as passionate as I am that he does well. For me, I’ve had a very bad year this year. I threw away Badminton on Nereo, and I shouldn’t have fallen off when I did. At the World Equestrian Games, I was ninth when I wanted to get a medal so I’ve been putting quite a lot of pressure on him to win here. Hopefully, I will be able to go to Kentucky and go for the Rolex Grand Slam, but I am a little light on horses at the moment, so we will assess in February and see how we are going.”

Sam Griffiths riding Happy Times: “I always knew the last line was going to be difficult for this horse. He had a rail down early on and, apart from that, I don’t think he touched a fence. So yeah, I was quite disappointed to come out two down. It’s a very tense atmosphere. The horses have to be so good after jumping round that course yesterday. I really wanted to try and win for him here. He really deserves a four star win.”

Jonathan Paget riding Clifton Promise: “I was very happy with him jumping clear. He’s pretty seasoned and knows his job pretty well. He was very cool and calm throughout the whole thing, which makes my job easy to guide him round. I’m very happy with my horse. He’s performed for me like he normally does, you know, he went in and we had fun together.”

In 2001, Rolex created the Rolex Grand Slam of Eventing. This prize is awarded to the rider who manages to win the Rolex Kentucky Three-Day Event, the Mitsubishi Motors Badminton Horse Trials and the Land Rover Burghley Horse Trials event in any consecutive order. Until now, only British rider Pippa Funnell has managed this staggering achievement, winning the title in 2003.