“He’s Not an Appaloosa. His Spots Move”… 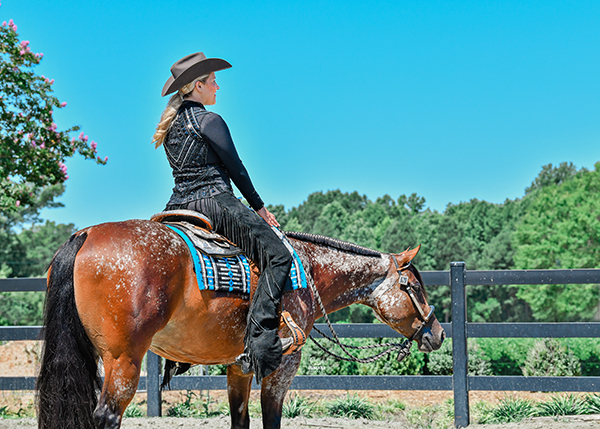 The vast array of colors and coat patterns that a horse can possess is nothing short of divine. Certainly genetics and bloodlines play a huge part in determining whether a foal will come into the world with a bald face or a speckled backside, but there is something miraculous that happens during the process to determine when and how coloring is placed. Whether you’re fond of the coppery coat of a solid Quarter Horse, the flashy chrome of an American Paint, or the spots of an Appaloosa, each breed provides evidence of divine design in its own unique way.

But, occasionally, there are those horses that don’t fit into a particular mold. If you’ve been following the AQHA circuit over the past year, you will have certainly noticed a special specimen of equine coloring in the 4-year-old gelding, Livin Da Dream. 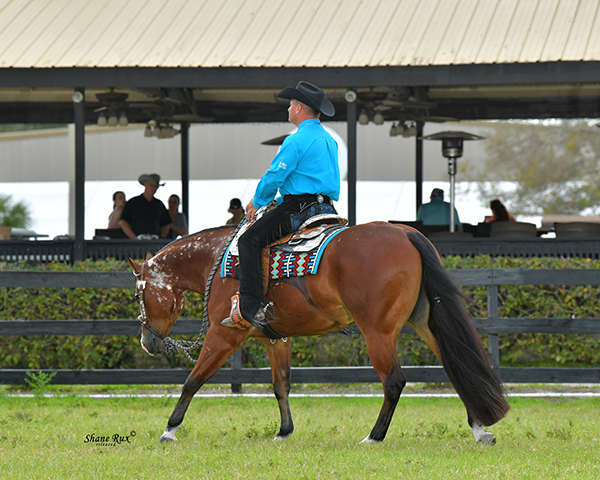 Upon first glance, he might appear to be an Appaloosa with flecks and specks of white hair that grace his neck, head, and hip. But, look at his breeding. He’s by The Lopin Machine and out of a daughter of RL Best Of Sudden. That’s AQHA, all the way. So where did those spots come from? What is he? An Appaloosa? A Quarter Horse?

We had the opportunity to chat about “Kurt” with one of his trainers, Liz Baker, to find out more about this interesting horse. “He belongs to Nettie Olsen, and we got him in November of his two-year-old year,” she says. “Jay Starnes had him as a two-year-old. He showed in The Equine Chronicle Masters at the Congress and was third. He already had spots when we got him; but, when he was born, he was solid bay. He developed his spots as he got older.”

Liz confirms that Kurt is in fact a registered Quarter Horse, and the color listed on his papers is bay. Of course, it isn’t unusual for solid-colored horses to roan out or become flecked as they age, but this horse is only four years old. What is unusual is that these spots move…

“His spots do change,” Liz says. “It’s crazy. They will come back and go away as he sheds out. It moves around. It’s not like it’s pigment, because he doesn’t have pink skin. It’s just the hair.”

“We’ve tested everything, because we thought it was some kind of deficiency. We tested his kidney and liver, everything. Then, with all the vets down here in Ocala being familiar with racehorses, we found one who knew right away what it was.” 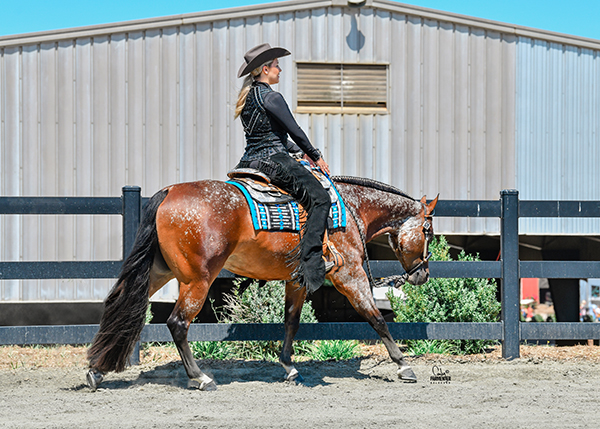 So what’s the cause of Kurt’s mysterious, moving spots? Birdcatchers. If you’re not familiar with Thoroughbred racehorse genetics from the 1800s, then you likely haven’t heard of Birdcatcher, or Irish Birdcatcher, (1833–1860) a leading racehorse sire of his generation. The stallion was described as small in stature, 15.3, with a short back, sloping shoulder, and expressive head (Wiki, 2021). Birdcatcher also had ticking, or white hairs, that were scattered throughout his flank and at the base of his tail. This is a trait he passed on to his offspring, and the hairs became known as Birdcatcher ticks. However, he possessed another marking as well, small white spots, that were called Birdcatcher spots.

One might think it a stretch to link a Thoroughbred racehorse stallion from the 1800s to a modern-day Western Pleasure specializing American Quarter Horse, but it’s actually not that unbelievable. Case in point: Have you ever seen a chestnut, palomino, or similarly dark colored horse with reddish or black “grease spots” or “smudges?” They’re often random in placement, might only be visible when the horse sweats, or might appear as the horse ages. These dark colored spots are called Bend-Or spots and were named after another Thoroughbred stallion, Bend Or. He was a chestnut with these dark spots, and his pedigree showed similar spotted animals as well. 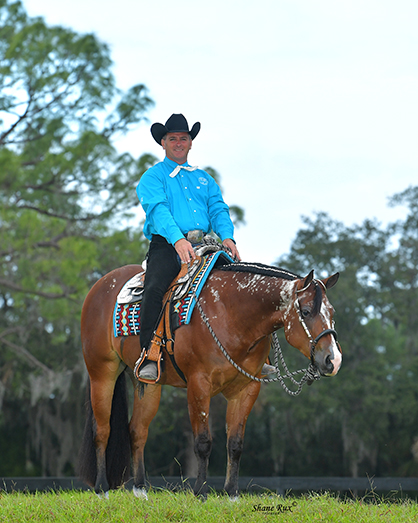 Back to Birdcatchers, these small, random spots are often no larger than an inch and pop up on solid-colored horses. The spots move around, vanishing and reappearing on different parts of the body. These spots are continuously on the move, and that’s because there is no underlying pink pigment involved in their placement, which is typically the cause of white hair.

In an Equus article, Dr. Phillip Sponenberg, DVM, PhD indicated that no formal studies have been done on this rare coat characteristic to provide a genetic link to a specific breed. However, it is known that these types of spots tend to run in the family, (Equus, 2021).

No matter the cause of Kurt’s spots, it’s clear that the result is magnificent. This gelding is quite an eye-catcher and garners attention both in and out of the show pen. Liz reveals that she’s excited to finally have the opportunity to explain about his interesting coat pattern.

“Last year, we did futurities, so everyone thought he was just a really good Appaloosa,” she says. “Then, the first time we showed him at a Quarter Horse show, at the Arizona Fall Championship, it was funny, because everyone was surprised to learn he’s a Quarter Horse. Everyone thinks he’s beautiful and different.”

“Nettie used to own Appaloosas, and she owns this horse, so everything just thought he was an Appaloosa. At one point, I said we should ride around with a sign on his butt that says, ‘I’m not an App!’ We’ve tried all kinds of supplements, but it doesn’t change anything. He’s just special.”

“He’s strong and has a ton of cadence,” she says. “He’s got a lot of eye appeal and all the things you look for in a pleasure horse. He has a great personality. He’s the sweetest horse, and he’s got a good heart. We started changing leads and will be adding Western Riding and Horsemanship.”

If you’d like to check out this spectacular spotted specimen for yourself, watch for him at the Sudden Impulse Futurity, Big A, NSBA World Show, Quarter Horse Congress, and AQHA World Show.

If you have a story about a special horse, email B.Bevis@EquineChronicle.com to share.