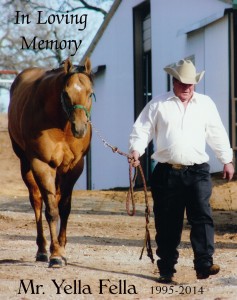 We are deeply saddened that we must relay the news that halter horse industry great, Mr. Yella Fella, was laid to rest Friday, August 8th, 2014 due to the development of a painful orthopedic condition. Linda Gordon of Fossil Gate Farms took a few moments to share some fond memories of the two-time AQHA World Champion and two-time PHBA World Champion she simply called “Yella.”

“He was 19 years old, ” Gordon says. “He’s buried here at the farm, and he’s going to stay with us. We felt like it was a once-in-a-lifetime opportunity to own a horse like him. I feel like he has left behind a record and a legacy that will stand the test of time.”

“He was N/N, but he didn’t look N/N. He looked like an N/H horse. He was one of the first real outcrosses for the Impressive bloodline. He marked all of his foals. You could definitely tell if it was a Mr. Yella Fella versus any other stallion. You know when you saw one. He was a remarkable horse, and we were lucky to have been able to own him.”

Mr. Yella Fella was a 1995 AQHA stallion by Paige Impressive and out of Let’s Skip Town. Not only did he personally achieve four World Champion titles, Yella’s get have gone on to be named World Champions in multiple breeds, such as AQHA, PHBA, APHA, and ABRA.

“I think he helped change the halter industry in many different ways,” she says. “I know he really put a mark on the halter industry by being a palomino. People really starting showing more palomino halter horses. He had World Champions in every breed. He’s going to be truly missed.”

Although Mr. Yella Fella is gone, he will certainly not be forgotten. Gordon sees her beloved palomino stallion every time she looks out into the broodmare pastures at Fossil Gate or when she passes by the stall of his look-alike son, FG A True Fella, who has gone on to become an impressive sire in his own right.

“We have a lot of memories,” she says. “Every time I look out in the pasture, I see Yella Fella daughters. They are great broodmares. Also, we have quite a bit of frozen semen, so we will still be breeding to him.”

“We have a 2-year-mare in the $100,000 class [at the Breeders Halter Futurity] that’s out of him. Her name is FG Ladies Love Jewels. She’s a dark chestnut, and she’s drop-dead gorgeous. She’s the prettiest thing you’ve ever laid your eyes on.  We have a baby stud colt on the ground this year that’s a palomino by Phenomenal Ms. He’s got big shoes to fill, but we hope he can follow in his daddy’s footsteps.”

It goes without question that Mr. Yella Fella will be regarded in the history books as one of the greatest palomino halter horses of all time. For Linda and Gary Gordon and the staff at Fossil Gate Farms, Yella was a part of their family.

“He was so powerful and impressive to look at,” she says. “People have come from all over the world to see him. Everybody wanted to come to the farm to see Mr. Yella Fella. He is going to be truly missed.”

We would like to send our condolences to the Gordon family, everyone at Fossil Gate Farms, and Mr. Yella Fella fans around the world.