Grazing the Metabolic Horse- A Game of Russian Roulette 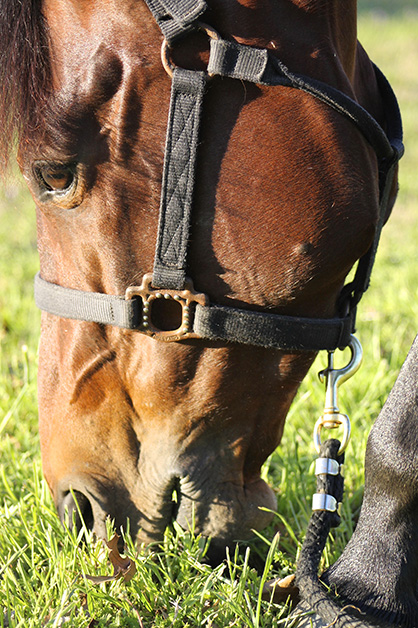 Eating grass seems like the most natural thing in the world for a horse, but the grass in managed pastures bears little resemblance to what is available to a feral horse. The other part of the scenario that is very different, is that the feral horse will often travel an average of 20 miles a day — much more exercise than domesticated horses get.

Exercise is the best way to keep insulin and glucose in good control. Otherwise, tight restriction of sugar and starch intake to no more than 10% of the diet is needed.

Spring growths of grass at their peak almost invariably exceed that limit. They are extremely dangerous for any horse with problems in controlling insulin. Areas that experience considerable regrowth in the fall after high summer heat, may have a similar high sugar scenario at that time.

Also dangerous is regrowth after a period of drought. Stressed grasses in general, whether from drought, high heat, cold, or poor nutrient availability, can also have high levels of sugars particularly in the lower portions of the plant, which are likely to be consumed in over-grazed pastures.

Mature stands of grass which have gone to seed will have the lowest levels of sugar and starch, but even this fluctuates. In the warm months, sugars are considerably higher in late afternoon than early morning. However, the onset of cool nights (below 40oF) means even early-morning grazing is risky.

Limiting your horse’s time on pasture won’t necessarily lower the risk. Research has shown that horses that have their grazing time restricted will compensate by consuming up to three times as much as usual in the time they do spend on grass.

The bottom line is that allowing metabolic horses to graze is always Russian roulette. Turnout for exercise, but with a muzzle that completely prevents grazing, is the safest alternative. Because exercise activates muscle and liver glucose uptake by mechanisms that do not require insulin, allowing 15 to 20 minutes free grazing after moderate (trotting) to heavy exercise sessions is also safe.

For those who insist on pushing their luck, allowing grazing (hopefully with at least a partially sealed muzzle) on mature stands of grass that have already dropped their seed is the least risky.

Contrary to what you might think, dormant pastures in winter are not safe. The lower portions of these plants are extremely high in sugar. This is how the cells keep from freezing.

Depending on how severely affected they are, the weather in any given year, how much they move around on pasture, you may get away with grazing your metabolic horse for a year or two — but sooner or later it will catch up with them. It’s just not worth the risk.

Started in 1999, the ECIR Group is the largest field-trial database for PPID and EMS in the world and provides the latest research, diagnosis, and treatment information, in addition to dietary recommendations for horses with these conditions. Even universities do not and cannot compile and follow long term as many in-depth case histories of PPID/EMS  horses as the ECIR Group.