Good Better Best – Welcomes a New Partner to the Team!

March 6, 2018 | Filed under: Current Articles,Editorial,Featured | Posted by: Alex A. 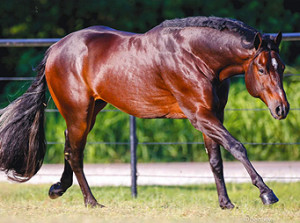 The Quarter Horse Congress is a favorite among horse show competitors for obvious reasons. It’s the pinnacle of our sport: three weeks in October devoted entirely to our beloved American Quarter Horse. The Congress is truly unique, however, because of its duality. It has the ability to provide the crowning glory, the final cap to the culmination of a horse’s career. On the other hand, it’s often used as a launching pad for a debut performance; which, in reality, has the ability to make or break a horse’s future in the industry.

This was certainly the case when the crowd watched as a 16.3 hand, bay stallion named Good Better Best trotted into the pen during the 3-Year-Old Non-Pro Hunter Under Saddle with Courtney Brockmueller in the irons. Courtney and “Mag” were rewarded for their performance that day with a Congress Championship, and, a few days later, a Reserve Championship in the Open division. That served as an excellent coming out party for the stallion many are hoping will help change the face of Quarter Horse Hunter Under Saddle with his size, substance, talent, personality, and an impeccable pedigree to match. By the late stallion, Good I Will Be, and out of Luke Whoo, Good Better Best, fondly known as “Mag” to those at Show Stop Farms, was homegrown and raised at Nancy Sue and Larry Hansch’s facility in Nocona, Texas.

Nancy Sue purchased Mag’s grandmother, a Thoroughbred named Wahoo Baby, for $900 at a kill sale back in the 1990s. Years later, that mare’s offspring have gone on to earn in excess of $500,000. One of those offspring was Luke Whoo, a mare that would provide Nancy Sue with a very special colt she describes as her favorite.

“He was always really special from the beginning,” she says. “We groomed him for a future as a breeding stud. He lived his weanling and yearling years out in the pasture, just being a horse. Sadly, he sustained an injury when he was two years old, so he spent the entire year on stall rest. Colt Andrews started him for us, and he really just started being consistently ridden in July of his 3-year-old year. He showed at just one show before the Congress to get his ROM.”