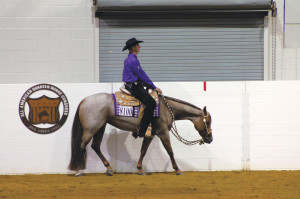 Congress wins are always memorable; but for Gil Galyean, the 2015 Quarter Horse Congress will stand out for a very special reason. It was during the Congress that he became the first rider in NSBA history to record more than $1 million in earnings. As scores were tallied during The Equine Chronicle Masters Two-Year-Old Western Pleasure class, a ceremony to mark his achievement was held in the center of the arena. Galyean remains humble yet proud of his accomplishment. “Well, I’ve certainly been at it a long time. It’s not something that came real quick,” he says.

At the start of the year, Galyean thought the milestone might be attainable in 2015, but he admits, “I didn’t want to talk about it. I didn’t want to jinx it.” He didn’t even keep close track of his winnings. In fact, he wasn’t aware that it had actually happened until NSBA Executive Director Dianne Eppers dropped by his stalls to present a huge poster and flowers to commemorate the accomplishment. That’s when it really sunk in. “I didn’t even know what horse I made it on,” he remarks. Galyean may not have been adding up each win, but NSBA sure was, and the organization was determined that his achievement be publicly acknowledged. Galyean was presented with a trophy and commemorative jacket in front of a packed crowd that had gathered for the Equine Chronicle Masters event, which Galyean happened to be competing in. His wife, Becky, members of the Ohio Quarter Horse Association, National Snaffle Bit Association, and the Quarter Horse Congress committee joined him.

“I’ll be honest with you; It was a little emotional,” he says. “Of course, Becky was there with me. She has been such a special person in helping me attain this status. It was wonderful that she and I could share the experience together.” Gaylean was also quick to extend his appreciation and gratitude to the NSBA and the Ohio Quarter Horse Association for the presentation ceremony. “They obviously went to a lot of effort to put it together,” he says. He was surprised and overwhelmed by all the fanfare. “It was a pretty special night. It meant a lot to us. It’s probably the most special night I’ve ever had, as far as showing horses goes,” he added.

Galyean views the honor as a testimony to the next generation that there is a rewarding future in showing and training horses. “I hope it shows a lot of younger trainers that they can stick with something and make a good living in this industry. If you work hard and treat people well, that is treat people the way you want to be treated, there are opportunities within NSBA,” said Galyean.

There was still one more big surprise to come that night. Galyean rode back over to the lineup to await the calling of the Masters scores. It proved an exceptional night for Team Galyean, as his mount, VS Lady In Red, took the top honors in the class. The smooth-moving, roan mare is owned by Kristen and Wesley Galyean and is by their stallion VS Code Red and out of Cool Krymsun Lady.

Galyean is a NSBA Hall of Fame inductee and has long been an ardent supporter of the association. He has served on several NSBA committees and was president for one year. He is very proud of his time and experiences serving the Association. He is also thrilled to see that the group is enjoying high numbers like never before with both membership and participation in approved events. He notes that the NSBA World Show has blossomed into one of the biggest events in the show horse industry. He also advocates the tremendous value NSBA earnings offers for the horses as well as the riders. Gil believes that with more money came tougher competition, and the quality of horses has been on a steady, upward trajectory. Galyean attributes the growth of NSBA to a couple factors. “Number one, we as horsemen are drawn to good movement. That’s what Western Pleasure and Hunter Under Saddle are all about. Also, NSBA is very user-friendly for the exhibitors. The staff is very cordial and it’s professionally run,” he says. Galyean reiterates the other big factor for exhibitors is being able to win money and put show records on their horses.

Over the years, Galyean has logged many miles in the saddle in order to accumulate $1 million in earnings. “I remember showing in classes that offered prize money very early in NSBA’s existence. That was back in the mid-to-late ‘80s.” He has seen the horses and industry change, but his long-term success shows that good horsemanship will always win the day. “I think horses are more consistent in their self-carriage now than 15 years ago. Trainers have become more evenly matched now. When I broke into it, there were five or six guys who were way ahead of the rest of us. Now, everyone is at a really high level and so good at what they do,” he says.

Besides having a steady stream of talented horses to ride, Galyean credits the work of his team, both present and past, as a big part of his success. Gil says, “I’ve had super employees over the years. A big part of this business is who you hire.” He also highly values Becky’s input. “She has a great eye. She’s very good at seeing strengths and weaknesses in horses.” Ultimately, it all boils down to hard work combined with professionalism, love, and dedication.

There have been so many exceptional horses throughout Galyean’s career that he’s hard pressed to shine the spotlight on just a few. “Mac Dudley was probably the first great horse I had that won a lot of NSBA money, and he won the Congress Futurity. Dee Invitation was another great one that meant a lot to me, and another Congress Futurity champion,” he says. He also has a soft spot for Cool Krymsum Lady, who earned over $100,000. A very special mare indeed, she is the dam of the 2015 Equine Chronicle Masters Champion, VS Lady In Red, as well as previous Masters winner, Suddenly a Cool Lady. 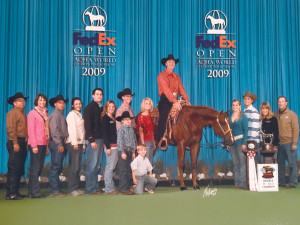 Cool Lady Lopin, Mr Rusty Zipper, Investment Creditor, Hot N Spicy Me, Hot N Blazing, Golden Moonlite, and So Good Im Classic racked up impressive earnings as well. World and Congress champion Onlygoodtilmidnight was a hefty contributor to the tally in her own right. Then, her son, How Bout At Midnight, came along and repeated his momma’s 2-year-old Western Pleasure win in 2014 along with plenty of earnings that continued to grow Galyean’s total.

Jenna Dempze has been riding with Gil Galyean since 2007. Galyean has led Jenna and her parents, Sue and Gary Dempze, to great pairings with Sure Am Hot and Rewind And Repeat, who have contributed nicely to that million-dollar mark. He piloted Sure Am Hot to a NSBA Two-Year-Old World Championship, Southern Belle wins as a three- and four-year-old, and an NSBA Breeder’s Cup Futurity win along with a slew of other prestigious awards.

Jenna is also proud of How Bout This Cowboy, who the family purchased as a maiden two-year-old. “Gil was Reserve on him at the Congress and the World,” she says. Jenna went on to show “Cowboy” as a 3-year-old and later sold him to Fritz Leeman. “Now, he is making a name for himself as a stallion,” she adds. Jenna’s 2-year-old horse for 2015 was Special And I Know It, who Galyean picked out and showed this year at the NSBA World.

Jenna appreciates Galyean’s thoughtful insight in all matters. “Whether it’s buying a horse or even a simple decision, he wants to make the best choice for the people involved. He considers all the details and the situation,” she says. She laughs when she thinks about how sometimes his lengthy decision-making process can drive her a little nuts. “When he tells you something, he really thinks about how it’s going to impact you,” she adds.

Jenna concurs with the commonly held opinion that Galyean is a humble guy and that he has taken this whole million-dollar milestone in characteristic stride. She notices how he always recognizes the part that Becky and his family have played in his accomplishments as well. She says, “He really doesn’t want to take credit for it. He’s always quick to thank his team for helping him. He definitely isn’t afraid to give credit to the behind-the-scenes people, and he’s always thanking his clients.” She says he has a way of making all his clients feel appreciated. Jenna is looking forward to another great year with her horses and is excited to see how her 2-year-old for 2016 develops under Galyean’s skillful hands.

Candice Hall and Cory Seebach have been with Galyean for nine years. During that time he has shown Machine Made, Made By J, Hawaiian Honey, Only Invite the Best, U R Certainly Invited, Oughta Be Western, and Cool Lady Lopin for the couple, just to name a few. It’s been a very successful team. Seebach says, “He’s won us many Top Ten titles at the Congress and World Show, as well as multiple NSBA World Championships and other futurity wins.” Hall and Seebach appreciate more than the trophies though. They fully support his approach to always strive for excellence while keeping the horse’s natural ability in mind. Seebach explains, “He never sacrifices good movement for a quick result on a given day. He’s a true horseman, able to understand each horse’s athletic potential and trainability. He knows how to get the most of that particular horse and knows when to back off and when to push.” Seebach echoes Dempze’s opinion regarding Galyean’s thoughtful nature. She adds, “Gil is a very deep thinker and takes everything to heart, which is part of what makes us love him!”

As for life post-one million dollars, Galyean has no plans to coast along. He’s right back to work riding, evaluating, coaching and planning. He says, “It’s our way of life, our business and profession. We’re going to continue to train and show.” Certainly, he is going to continue to accomplish new milestones along the way.