From Career-Ending Injury to Miraculous Recovery 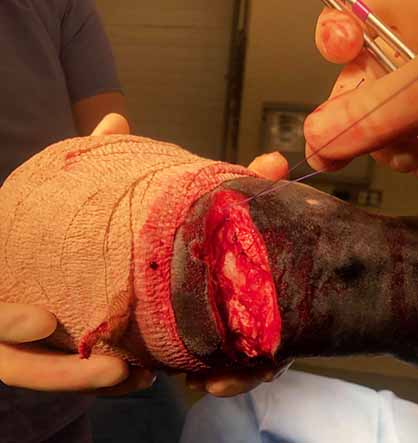 A pretty snow-covered day turned into a scary scene as I walked to the barn for evening chores. Within my sight was my 6-year-old Quarter Horse mare, Blonde Inna Mercedes, also known as “Liberty.” She was standing outside in her private paddock as she watched me making my way to the barn to feed. Being her playful self, she turned and let out an ornery kick. As, soon as I heard it, I took off running. The sound I heard was her hitting the metal siding on my barn. I feared that I would find her injured. There was no way to prepare myself for the scene that I would see.

She was in fact injured and bleeding badly. I quickly grabbed a set of quilts and wraps to try to slow the bleeding enough to get to the house to call my vet at Diamond M Veterinary Clinic. I applied three sets that quickly became saturated as I franticly kept wrapping. Dr. Kerns was traveling home from a farm call and rushed to my barn as quickly as possible.

He took off my wraps to put on a major pressure wrap and broke the news that the laceration was very deep and involved the coffin joint from his quick inspection. Due to the amount of blood being lost, we were not able to keep the wound unwrapped long enough to fully exam or even try to clean it. Liberty was quickly starting to show signs of shock. She was given IV medicine to help with pain and thicken her blood to help it clot.

We tried to manage her at home; but, after 24 hours, it was clear that if we were going to save her life, she would need to be transferred to The Ohio State University Veterinary Medical Center in Columbus. I wasn’t sure she could make the trip, because she shook uncontrollably and I feared her balance in a trailer would be compromised. 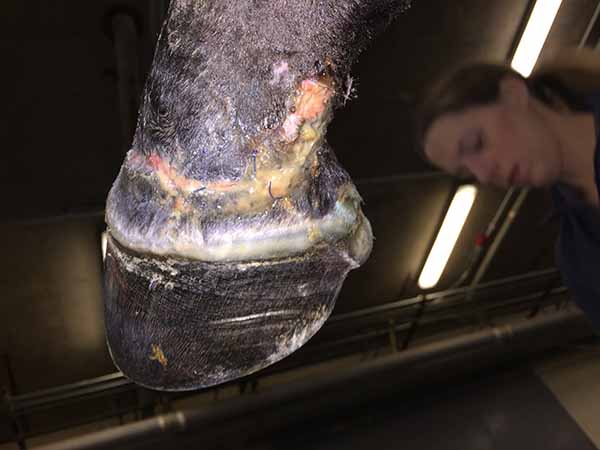 Being met by Dr. Gardner in Columbus, was a sigh of relief. Liberty made the 60 mile trip without incident. She was led into a private exam room, and the staff immediately went to work. Dr. Gardner promised to contact us as soon as they had her in the operating room and had a better understanding of what her injuries included. We knew she was in a fantastic place and her chances of survival were greater now. The hard part was waiting to hear. We had started to talk about the “what if’s” that go along with owning animals. We also remembered that Liberty has proven in the past that she is a fighter and has a desire to try and the will to live.

Finally, we got the call. The good news was that there was nothing fractured. The bad news was that she severed an artery, and it was confirmed that the laceration did reach the coffin joint. She had completely severed the long digital extensor and medial collateral ligament. Infection was a major concern also, since the injury had not been able to be cleaned until the artery was tied off and the bleeding controlled through surgery. The reality was that if she survived, and if she didn’t get an infection, she might only be a “pretty pasture ornament.” At that point in time, it didn’t look like she would ever have her career back.

Having been bred to be a Reiner, she was started under saddle by Stacy and Jesse Westfall. She had a bright future and was currently being ridden and shown by a youth 4-H member. Liberty had demonstrated her versatility and athletic ability both in the show arena and out on the trails. She had a long life ahead of her and was surrounded by people who loved her. This accident reminded everyone how life can change in the blink of an eye. I couldn’t shake the sick feeling in my stomach that had been present since the accident happened. The only thing to do at this point was to wait and pray.  We visited her several times during her stay. She was always glad to see us and was looking more like herself at each visit. 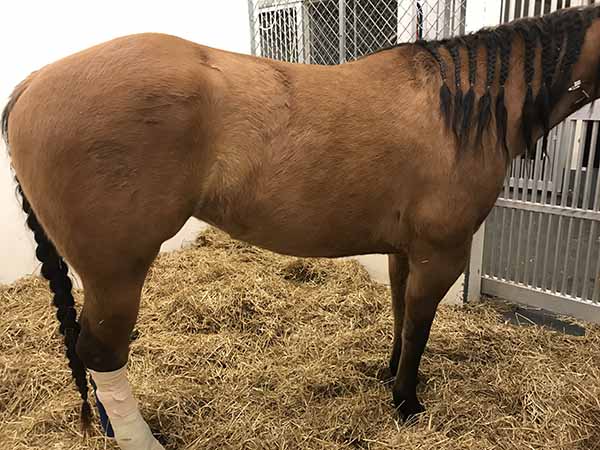 After eighteen days in Columbus, I brought Liberty home. She had made progress each day, seemed to be comfortable in her cast, and thankfully never got an infection. Her release was three weeks sooner than expected.  She came home with a detailed set of strict instructions, starting with stall rest. I was told that ligaments take eight months to heal, so we would not know how much healing might take place until September, which was a little over seven long months away. 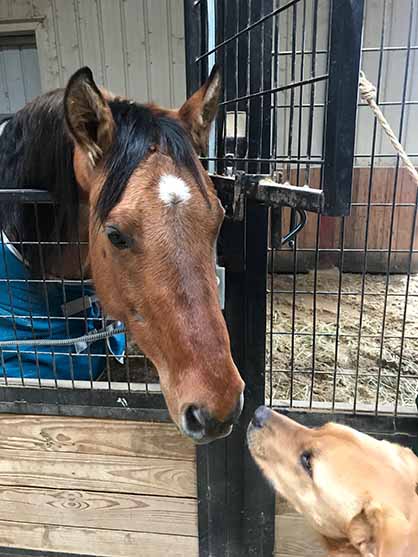 As time progressed, and Liberty continued to beat the odds and expectations, I got very excited and started hoping that the trend would continue. I maintained contact with Dr. Gardner, who was pleased with each update. She even called her “the miracle horse.” Together, we updated the detailed rehab plan to start to challenge Liberty as she was ready. Without missing a beat, she stayed ahead of the expectations and amazed us with her willing attitude and desire to please. After five months, Dr. Gardner said I could ride her lightly to see how she did.  The first few rides were nerve-racking for me, but Liberty never favored her injury. To our amazement, she has done incredibly well. I have been riding her on a consistent basis for eleven months. She has never taken a lame step; she’s always eager for the attention, and she’s doing super! We have been on many trail rides as well, as she loves to be outside the arena.

It’s amazing to think about how far she has come. She has a few restrictions that include no lunging, roll backs, sliding stops, spins, or jumping. Aside from those, and the scar that tells a story of a January day, you would never know what this mare has been through.

Quarter Horses are known for their dispositions and versatility. My mare demonstrates these characteristics and a willingness to go the extra mile. Liberty is a “pretty pasture ornament,” but she is thankfully much more than that too!