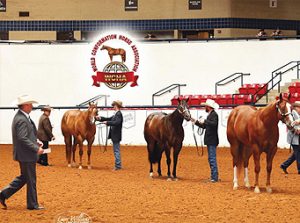 When you think about a Halter horse, what first comes to mind? Striking beauty? Finely chiseled muscles? Versatility? If that last description doesn’t immediately come to mind, there’s a reason. It might be because, somewhere in the continuous improvement of the elite Halter horse, the focus on how these horses with great conformation can perform was lost. In response, the World Conformation Horse Association has developed an innovative new program that seeks to showcase the remarkable versatility of these powerful athletes. The Equine Chronicle spoke with WCHA Executive Director, Don Falcon, for an in-depth look at the purpose behind the two new Versatility classes that will be held during the WCHA Breeder’s Championship Futurity at the 2019 APHA World Championship Show in Fort Worth, Texas.

In his viral TED talk, “Start with Why,” author Simon Sinek states that great leaders and organizations aren’t great because of what they do, but because of why. The “why” is critical because this is the purpose, cause, or belief that will drive your organization. So, the first question one might ask about the creation of two new Versatility classes for the WCHA Breeder’s Championship Futurity is, simply, why? Executive Director Don Falcon has the answer. “A significant way our industry has evolved since the 1970s and ‘80s is that competitors, back in the day, showed their horses in Halter in the morning and rode them in performance events throughout the day. We didn’t call a horse just a ‘Halter horse’ or an ‘English horse.’ If you were into Roping, you roped, but you also showed in the other classes all day long. We lost a lot of exhibitors in many events due to the specialization of stock breed horses. We want to bring the concept of showing all day back to these events. Back then, it was fun to show your horse all day, and we want to bring the fun back into it,” he says.

Falcon also expresses concerns that, in the Halter industry, breeders and fans of pretty, athletically-built horses have been priced out of the competition. “We’ve seen an alarming trend over the past ten years in the declining number of people showing, breeding, and raising Halter horses,” he says. “We’ve talked to some of the people who have left the industry,
and they have told us that we’ve priced so many exhibitors out of the business. They can’t afford to purchase a $15,000, $25,000, or $50,000 baby, but they still want to show, they still want to breed, and they still want to compete. However, they don’t feel like they can compete with a $5,000 horse at our futurities and World Shows. Our breeders raise 1,500-1,700 foals each year that are halter-bred horses sired by WCHA-nominated stallions.Yet, there are only 10 out of that crop that can be in the top ten at the World Show and only 15 to 20 that can earn a futurity check in our larger futurities. Currently, we only reward the top echelon of the Halter horses that are raised every year. A primary goal of the new WCHA Versatility program is to create a market that rewards the horses that have great conformation, great minds, and great athleticism.”