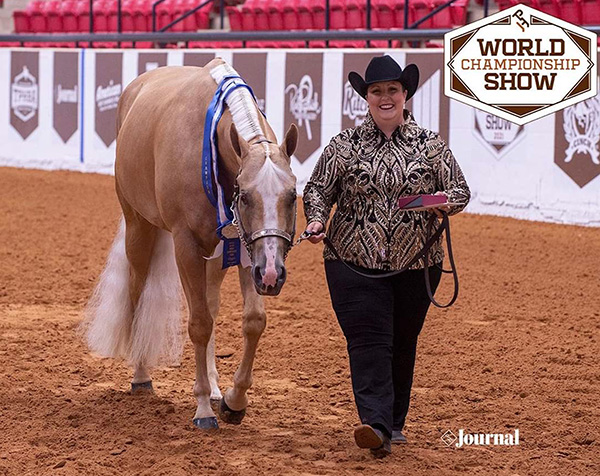 The APHA World Championship Show, hosted at the Will Rogers Memorial Center in Fort Worth, Texas, has just concluded. However, many new exhibitors that competed at the event for the first time have created memories that will last for a lifetime. World Show first-timers like Ellen Mae, Journey Frericks, and Sydney DePauw share their fond memories of their first experiences at the APHA World Show.

Ellen Mae is a special education teacher at Rockridge High School who competed at the APHA World this year in the Amateur Walk-Trot division. She has shown horses since 2000 and began her equestrian career in a 4-H club. In 2013, Mae attended her first Paint show and fell in love with the breed. Her current horse, Platinum Jeansrfancy, aka “Scarlett,” was purchased as a weanling in 2015. As a team, they were crowned the Intermediate Champion and World Champion in Amateur Walk-Trot Showmanship and received multiple top ten titles. 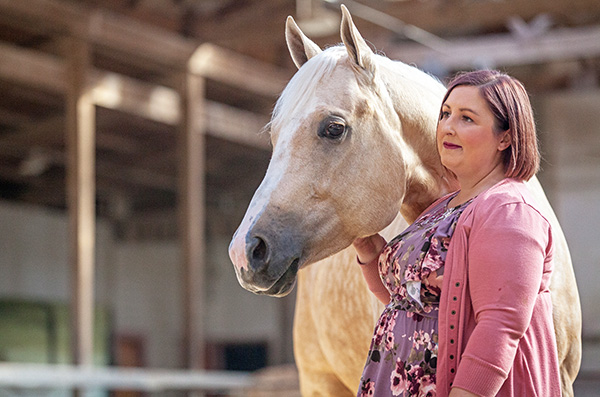 Mae explains how she felt stepping into the World Show arena to compete for the first time. “When I was standing there waiting for my first class, I kept telling my horse that we could do this,” she says. “I felt nervous the day before. When I was in the warmup pen, I was overwhelmed and worried that Scarlett might be anxious, because she was in an accident when she was three years old. But she exceeded my expectations and worked very well. On the day of my class, I went out there, I did my pattern, and I felt amazing.”

She explains that her favorite part about the APHA World Show was getting to watch the results of classes. “You see so many people getting excited and emotional,” she says. “I was getting emotional for other people. There were some riders that I was crying for that I had never even met. Youth walk-trot kids had me in tears, because they were so happy for receiving fifth place. It was truly a beautiful thing.” 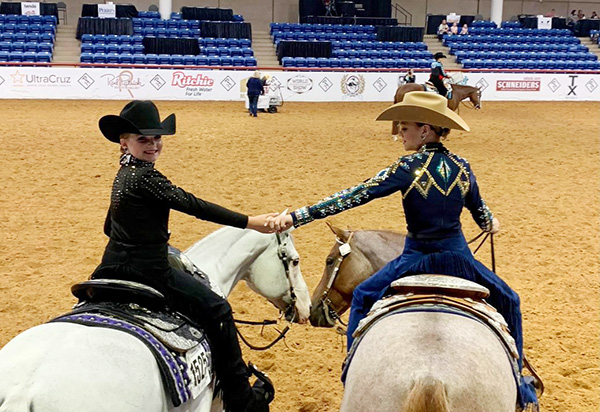 From one walk-trotter to the next, Journey Frericks is not only a newly crowned World Champion, but also a spunky ten-year-old. She lives in Quincy, IL where she keeps her horse Danson To The Music, or DJ. Frericks has been showing since 2019, when she first stepped into the pen at her local county show. Her skills grew as her personality blossomed. Many describe her as sassy and witty, but the sweetest girl you will ever get the chance to meet.

Frericks decided to go to the APHA World Show after she was invited to be on the Illinois Youth Team. She describes her favorite part of the experience as trotting her victory lap with her best friend, Emme Graves. For Frericks, this wonderful event got to happen twice! She won her Horsemanship class and took Reserve in Walk-Trot Trail, while Graves placed first. Frericks hopes that she can compete at the 2022 APHA World Show. 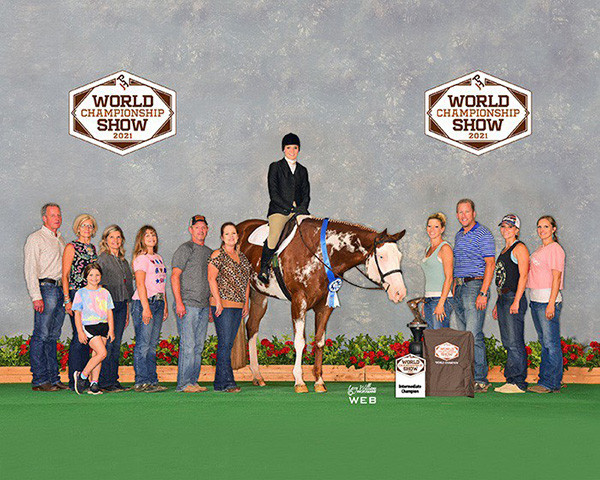 Sydney DePauw showed in the Open division, as a trainer, at the World Show, for the first time in her APHA career. DePauw is the daughter of Paint Horse trainer, Kari DePauw. She has attended the APHA World Show every year since 2007. Even though DePauw has competed at the APHA World in the past, as a youth, this was her first time competing as a professional.

DePauw spoke about what the transition from amateur to professional was like. “After my last youth horse, I branched out and got my first Hunter Under Saddle prospect named All Day Every Day. She turned out to be my heart horse and really taught me what my forte is! I showed her in Youth Hunter Under Saddle during her 3 and 4-year-old year.”

“I only showed as an Amateur for one year, and I leased and bought three, two-year-old horses to work with. Now, as an Open rider at such a young age, it can be intimidating! But, I have amazing supporters that believe in me and that have helped me along the way, which is amazing!” she says.

Apart from DePauw, Frericks, and Mae, we’re certain there are many other competitors who made their first appearance at the World Show this year. For all of them, it was a joyous event that will be remembered for years to come.

Hi there, my name is Cheyanne Bristol. I’m 19 years old, and I’m attending Illinois Central College to become an Equine Journalist and Photographer. I’ve shown with the International Buckskin Horse Association and the Appaloosa Horse Club all my life. I’ve also shown in All-Around events at the National and World level.

If you’d like to write a blog for The Equine Chronicle, email B.Bevis@EquineChronicle.com.