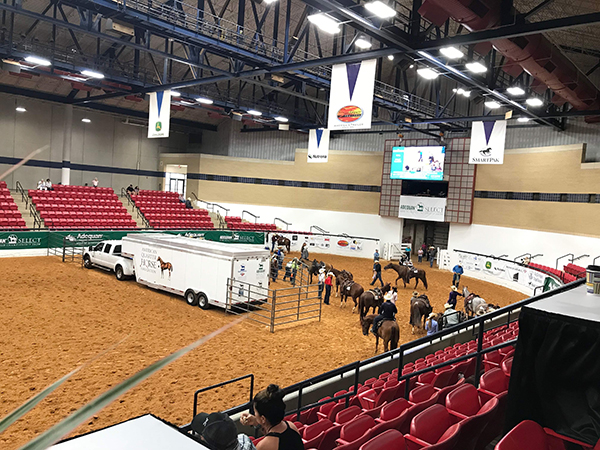 The AQHA Select World Show kicked off Tuesday at the Will Rogers Memorial Center in Ft. Worth, TX with a variety of classes from Showmanship to Performance Halter and Roping. This is the first year in Ft. Worth and while I enjoyed Amarillo (especially the restaurant Coyote Bluff) this new facility is great!

It’s like a small city, and I’ve gotten lost multiple times trying to get to the barns. The campgrounds are roomy and the weather has been hot. Luckily, the arenas are climate controlled. There are lots of new vendors here. There’s even a Starbucks. 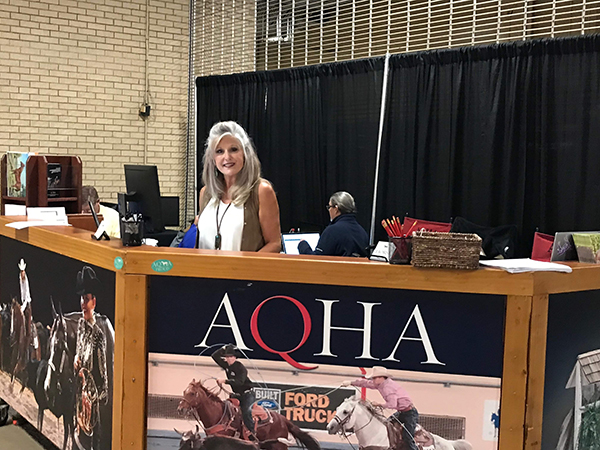 I went exploring and discovered that there are tunnels under the buildings connecting the arenas. So you can go from one to another without ever going outside!

While on one of my excursions, (code for I’m lost and trying to find the barn) I found the American Miniature Horse Association is here having their World Show. So, I stopped in for a few minutes and watched.

Next up on the schedule is Halter and some of the Over Fence classes.

Today the Halter classes kicked off in the Watt Arena while Working Hunter, Western Riding, and Roping went on in the John Justin arena.  I watched friends show in the Halter and then jumped across to watch the Showmanship finals where Dan Yeager was crowned champion. With the live feeds, I was able to catch some of the Western Riding prelims while watching Halter.

Tomorrow starts with more Halter and the Trail finals. Then, it’s on to Ranch Riding and the finals of the Western Riding followed by the prelims of Western Pleasure.

Since Terry Bradshaw is supposed to show in the Halter tomorrow, I’m pretty sure that’s the arena I’ll be in. Their stalls are in the aisle behind me, so I’ve been keeping an eye out for him. What can I say, I’m a fan!

On a side note, I didn’t get lost today…

On my last day in Ft. Worth, I wanted to watch as much as I could. I started in the Watt arena watching a friend show in the 3-Year-Old Mares (this also happened to be the class Terry Bradshaw was in). As I was coming back, I spied him at his stalls. I walked over, introduced myself, and got a selfie with him. Woohoo! Then, it was over to the John Justin arena to watch some Ranch Riding prelims and the Western Riding finals. Laina Banks rode Strawberri Wine to win with a score of 240.5. That was 10 points more than the Reserve Champion.

That evening, we attended the reception on the concourse and enjoyed snacks and drinks while watching the Hunter Under Saddle, Equitation and Western Pleasure prelims. There were some really great horses and riders.

As I finished loading everything this morning, and said goodbye to old friends and new, I felt a little sad. I enjoyed my time in Ft. Worth, but I’m ready to be home to see my husband. Till next year Ft. Worth!