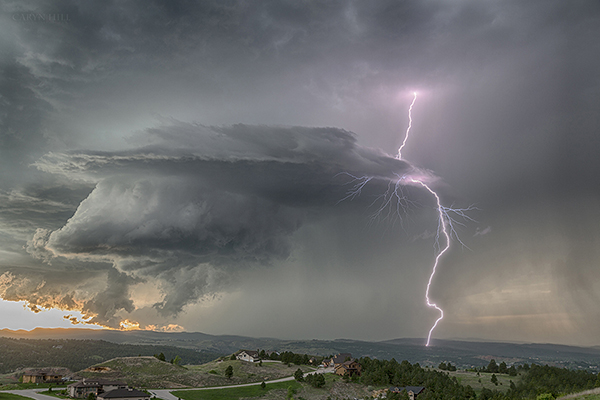 An immense storm structure rolls in across the plains. A wall of swirling rain and wind, hundreds of feet high, engulfs everything in its path. It blocks out all light, except for the dramatic cracks of lightning that rip down to the earth’s surface. This is nature at its most ferocious and awe-inspiring, and photographer, Caryn Hill, can’t think of any other place she’d rather be.

Our readers have likely seen Caryn photographing at horse shows for the Colorado Quarter Horse Association, at the AQHA Region 8 Show in Amarillo, or the Zone 3/YDF APHA show. What you probably didn’t know is that Caryn and her husband run a storm chasing company- providing tours for adventurous folks who enjoy tracking super cell structures, monsoon lightning, and tornados. 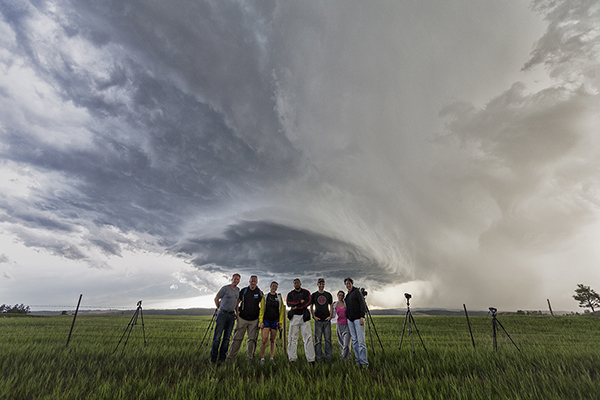 “The biggest difference in horse photography versus storm photography is the very fact that you won’t see anyone in their show saddles out in the rain!” Caryn laughs. “All kidding aside, there is a huge difference, because shooting landscapes versus horses are two totally different concepts. However, catching a lightning bolt versus that perfect stride? They both give me a thrill!”

“I’ve been very fortunate to be able to combine my passion for photography with my passion for horses. I’ve been riding since I was eight years old. I used to run Barrel horses in high school and then moved into the all-around in the early 80s. It was then that I also picked up a camera and shot mostly landscapes along with wild horses in Wyoming. I continued to shoot landscapes throughout Wyoming and Utah and then in Vermont where I had the pleasure of watching Dressage, Cross Country, and Jumping classes at the Green Mountain Horse Association. Once I moved back to Colorado, I semi-retired from showing Quarter Horses and got into show photography.” 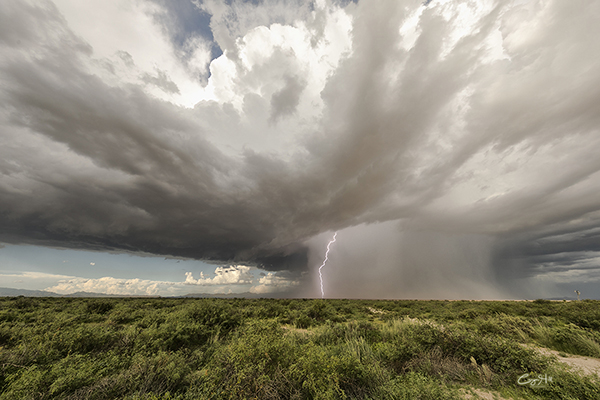 In addition to photographing at horse shows, Caryn helps run Silver Lining Tours and Southwest Photography Tours with her husband, Roger Hill, who actually holds a Guinness World Book Record for the person who has witnessed and documented the most tornados. The count is currently at 700. “I have a long way to catch up, as I’m only at 272 tornados,” Caryn says.

“Even though this is our company’s 20th anniversary, I’ve only been chasing severe weather for 15 years. Growing up in Kansas, it wasn’t the norm to go out and look for tornadoes! We usually found ourselves in the basement of our house or holding up with others in the basement of the local courthouse. My husband is to blame for introducing me to storm chasing. He’s has been interested in severe weather for nearly 30 years now.”

“We offer storm chasing tours that involve tracking severe weather across the central plains each spring through late summer. These tours track storms that produce large hail, tornadoes, and monsoon lightning. Our travels have taken us from Texas to Canada, Montana to New Mexico, as far east as Kentucky, north as Ohio, and back down to Arkansas. There isn’t anywhere we won’t go to capture the most severe weather on this planet!”

Caryn and Roger offer tours for both photographers and non-photographers. She directs and guides the photography tours, while Roger directs the regular storm chasing tours. A typical storm chasing tour can run anywhere from one day with an “on call” tour to five to ten days. The photography tours typically last six to seven days. Each tour begins the evening prior to the first day of action with an important orientation to review safety protocol. 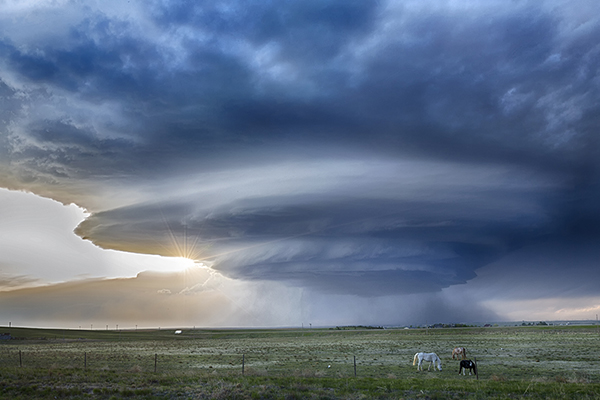 Sydney, Nebraska horses in front of a supercell.

“This orientation covers what to expect on tour, what not to expect on tour, how we handle comfort stops, what to do if we reach ‘Code Red’ safety, and how we handle accommodations each night. You will NOT experience a ‘Twister’ type scenario while out on tour with us. The next morning, or as time permits throughout the tour, Roger will conduct Weather 101 as he gives his interpretation of the forecast for the day.”

While there is always some risk involved with storm chasing, Caryn confirms that more people perish from climbing mountains or rafting a river. “I’ve been bucked off more horses and have more aching bones from those incidents then I’ve ever felt during chasing!” she laughs. “The most important thing to remember during a chase to always remain calm, drive according to road conditions, (hydro-planning can happen with only 1 inch of water on the road) and to always have an escape route. We won’t stop to view a storm without knowing where our escape routes are. Safety is our number one priority!” 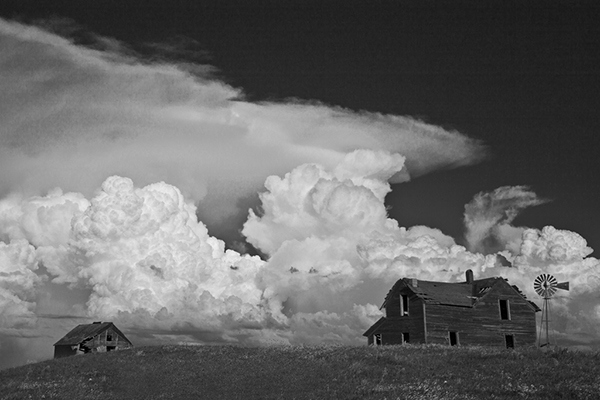 The same goes for storms that produce lightning and hail. If Caryn and Roger sense they’ve gotten too close, they are the first to pack up and leave to ensure the safety of their party. However, Caryn recalls one experience, near the site of Custer’s Last Stand in Montana, where a few curious onlookers resulted in a packed road that caused some trouble for the team.

“One time, due to no fault of our own, we were trapped behind multiple cars in Montana. A ‘squall line’ with 95 mph winds and copious amounts of hail was surging at the line of cars that decided to stop on the road. It’s a typical reaction to those who aren’t aware, but that’s the worst thing you can do! Keep moving, and you can more than likely outrun the hail. Once that squall line hit us, along with that hail, we had broken side windows in every chase van. I ended up bruised from shoulder to ankle, and everything in between, but it didn’t stop me from chasing!” 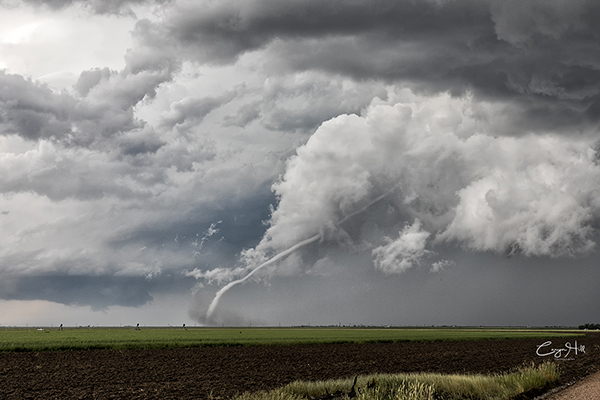 Caryn’s favorite weather phenomenon to photograph are dramatic lightning and immense storm structures. In order to capture the grand scale of these storms, she shoots with a Canon 5D Mark IV with a 24-105 mm and 11-24 mm lens. She also relies on a Glitzo tripod and Really Right Stuff ballhead to keep her equipment grounded during extreme wind.

“I can’t emphasize enough how important it is to have a good, sturdy tripod, because some of the inflow winds in a storm can reach up to 35-50 mph! It can be even higher as you get closer to a storm; but, where I typically set up my photography guests, it doesn’t get quite as windy. I also use a lightning trigger to help capture daytime lightning.”

“Not every tornado is a pretty, white, Wizard of Oz type of tornado, which is the ultimate photographer’s dream image. Lightning can be a challenge, as you have to know where to expect lightning to hit. There are certain areas within most storms that lightning is produced the most. Storm structure is a very close second favorite to photograph as there are sometimes storm structures that are so insane it’s hard to believe nature produced it! I LOVE getting my photography guests in front of jaw-dropping structure and to have an old abandoned house or barn in the foreground. It adds a bit of human element to the image and makes it easier to compare storm structure size to the surrounding environment.” 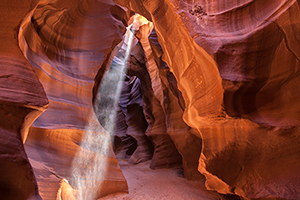 Another weather phenomenon that results in some incredible images is a slot canyon, a 200-300 foot deep rock crevice that’s produced by flash flood and winds. “As the sun reaches certain angles, the light bounces from one wall to the next, producing vivid colors of yellows, oranges, blues, purples, and reds. It best to go with a guide that knows the best time of year to be in a slot canyon, so you may capture the light at its best. It’s also good to go with a guide that knows weather, as you don’t want to get caught up in a slot canyon during a flash flood!”

Of all the impressive images Caryn has shot over the years, she has a few favorites. One in particular combines her love of photographing horses and storms. “I have several all-time favorite photos. The Sydney, Nebraska supercell structure does have horses in the foreground, and, as you can see, they could care less. The Simla, Colorado supercell structure has to be one of my most requested images and has done very well for me as well.” 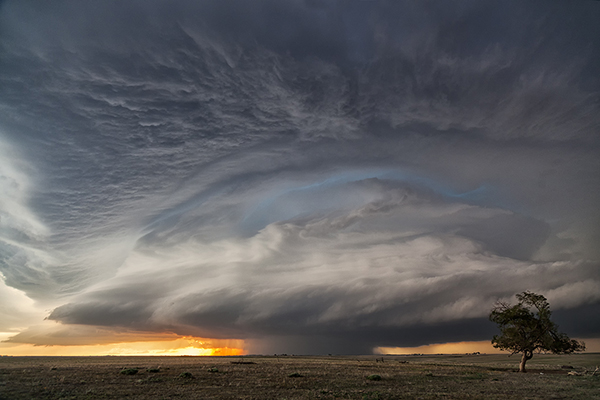 For more information about Caryn and Roger’s tours, click on the links below: