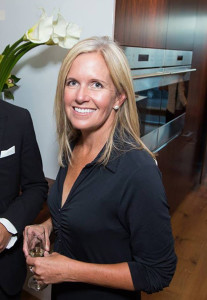 Click here to watch a video of Amy competing at the CEP Scottsdale Spring Festival and Classic this week.

Amy McCraken started competitively riding horses late in life, as compared to her fellow equestrians. A single mom of three kids with a flourishing career as the Founder and Publisher of Evergreen Custom Media, she didn’t truly fulfill her passion of riding horses until the age of 38.

“I’ve always loved horses, and I did save my dimes when I was little to rent a horse by the hour,” Amy says. “I took park district horse lessons. I was a competitive cyclist with state titles and spent time at the Olympic training center during my high school years, so that took much of my time. But I always wished I was riding horses.”

In 2005, Amy realized her dream, starting at .75″ jumpers and working her way up to meter Jumpers and 3’3″ and 3’6″ Hunters. “I showed as much as I could, four to six weeks per year, and I rode four to five days a week. It is/was what I look forward to every single day. I have two horses, so I get a few good hours of riding each day.”

However, an accident on January 7th, 2007 changed the course of her equestrian career and her entire life. She was bucked off her then 4-year-old James and the odd series of events that followed are what she refers to as “the perfect storm of circumstances.” 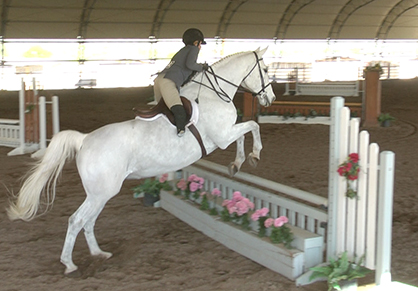 “Long story short, I landed on my feet, but my right foot was twisted out to the side,” she says. “The impact of the landing shattered my ankle, essentially breaking my foot off my leg. Then, as my leg drove into the ground, my tibia and fibula were broken in three places each, so essentially my leg was crumpled. My riding boots and thick winter socks are what kept the injury from being a compound fracture, with bone coming out of the skin.”

Over the next seven years, doctors did twelve surgeries to try to save Amy’s right leg. Unfortunately, none worked. In between each surgery, she kept riding and competing, sometimes in a cast, sometimes without irons, “anything to keep riding,” she says.

Surgery #13 took place April 22, 2014 when doctors amputated her right leg just below the knee. Things were looking up, and she was back to riding by August. However, more complications in September led to five additional surgeries, with surgery #18 on December 30th, 2014 to amputate her leg again, this time higher up on the thigh. Because of the complications that arose with previous surgeries, Amy gave her leg more time to heal and didn’t start riding again until the end of 2015.

Just this week, Amy competed at her first horse show in three years with her 19-year-old Holsteiner “Carisma.” The pair received a second place finish and fourth place finish in the 2′ 9″ Hunter division at the Spring Festival and Classic in Scottsdale, Arizona. How was this even possible? Well, anyone who’s met Amy McCraken knows better than to tell her what she can and cannot do. 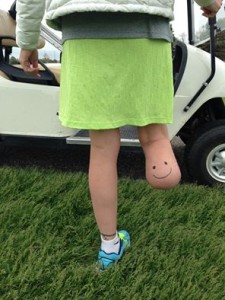 Back in 2014, before Amy’s surgery above the knee.

“My last surgery was 15 months ago,” she says. “The doctors knew better than to tell me I couldn’t do something at this point. With the original injury, the doctors told me I wouldn’t ride again, and it wasn’t looking good for me to walk again. I didn’t believe them and proved them wrong with each surgery and each recovery. With the amputation, they all said I might be able to ride western, but they didn’t think I could jump again.”

For the next two weeks in Arizona, Amy and Carisma will compete in the 2’9″ division and they hope to move back up to the 3’3″ or 3’6″ Hunters by the end of the show season. It’s a lofty goal, but one this fiercely determined competitor will undoubtedly reach.

What makes Amy’s recent success even more remarkable is that she competes without the aid of a prosthetic device. She does this for a number of reasons you might not expect. First, doctors estimated it would take 9 to 12 months for Amy to receive a “riding prosthetic,” and she certainly didn’t want to wait that long to get back in the saddle. Secondly, the only time she’s ever felt fear while horseback, even after the accident, was the result of wearing a prosthetic. 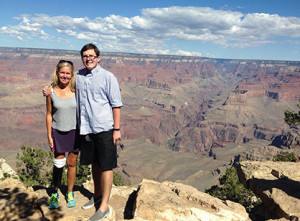 When Amy isn’t riding horses, she can be found enjoying other outdoor activities like hiking and wake-skating. Here she is hiking at the Grand Canyon with her son.

“Thankfully, I haven’t once been afraid of riding,” she says. “After the accident and first few surgeries, I was afraid I was going to be afraid to ride, but thankfully I wasn’t. The one time I tried to ride my horse with my prosthetic walking leg on, I felt fear. I was afraid that if I came off the horse, the prosthetic leg could actually break my leg and make me an above-the-knee amputee. That made me decide I was going to learn to ride without it.”

As it turns out, Amy is not only more comfortable riding without a prosthetic device, she feels she is a more effective rider, even more so than when she had two legs. “I can get close contact with my horses without the plastic or carbon fiber in the way,” she says. “I can control my stump. With the prosthetic, it kind of bounced around like a sloppy, lower leg and it really pissed my horses off.”

“Even though I still have my left iron, I have to try to keep things even. So, the iron is more there to help if I get a little crooked. I keep minimal weight in it and ride as if I don’t have any stirrups. I’ve had to learn to be very tight in my jumping position, so I don’t lean on the left iron, and stay square on the backside so I can control a runaway. I just really had to learn really correct riding.” 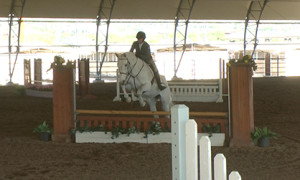 Even more amazing is that, due to intensive flat work, Amy’s “stump,” as she fondly calls it, has developed muscles, the opposite of what typically happens with most amputees. “With most amputees, the muscle deteriorates,” she says. “My prosthetist said one in 200-300 amputees develop a calf muscle like I have in my stump. It’s all due to riding. My thighs, seat, and balance have all become better than they ever were with two legs.”

With all the time Amy, her trainers, and her horses have put into rehabilitation, conditioning, and re-training, the reality of competing with only one leg has become what she likes to call her “new normal.”

“It makes me laugh,” she says. “My leg feels like it’s there. I still think toes up, sink into my heel, etc., and my calf muscle still moves like that, but when I watch the video, it’s not there, and it’s so strange. I do forget that my leg isn’t there or that I have a prosthetic leg until I see a picture or reflection. Again, it’s just my new normal.”

Amy’s horses had to adjust as well; specifically, they needed to learn how to pick up a trot and canter from a more forward seat with a firm squeeze of the thighs rather than the heels. Thanks to her trainers’ hard work, they’ve caught on pretty quickly. “My trainers have done an amazing job with my horses, helping them understand what we’re looking for. The biggest thing is fitness, and I’m still working on that. I have to earn every single step now. With two legs, you can ‘coast’ now and again.”

Amy is not only grateful to her friends and family who have supported her throughout this process, but also her talented former Grand Prix jumper, Carisma, who has undergone a transformation of her own. “Carisma was rejected from a few professionals,” Amy says. “She has some issues with being very strong, the Liverpool jump, anything the color blue, and getting in the gate. She came from Germany originally and has a good Dressage background, so she kind of likes to show off. She’s immensely talented, and I’m so lucky to have her. We spend a lot of time together, and she knows I’ve got her back and she’s got mine; it’s a good team. She’s a bit like Goldilocks; she can either be too much of a slug or far too strong, but when she’s just right, she’s magical to jump. Again, I’m so fortunate to have her as my teammate.”

To say that Amy’s story of returning to the show pen after 18 surgeries is awe-inspiring, is truly an understatement. She’d like to share some of the valuable lessons she’s learned along the way with fellow equestrians who might be facing their own challenges, health or otherwise.

“Find a way! Don’t listen to the doctor and prosthetist who tell you that you should just be happy to walk. Find a way. Just start where you are, do something today, and then add a little more tomorrow. Keep going.”

“I’m so grateful to everyone who has helped me get back in the showing, and I’m so blown away by all the support from people I don’t even know. I’m humbled!”