August 9, 2019 | Filed under: Current Articles,Editorial,Featured | Posted by: Alex A. 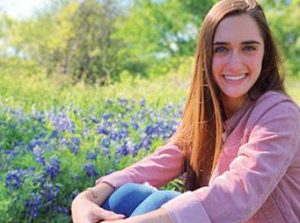 Every little girl loves horses, and Emily Maul is no different. On Emily’s fifth birthday, her parents bought her a five year old ranch horse called Que Me A Sassy Doll, aka “Sassy.” A partnership formed from the very beginning. With Sassy as her partner, Emily learned the basics of how to ride and handle a horse. When she was finally old enough to compete at a 4-H show, she decided to try barrels and poles. Her parents agreed, but there was one caveat, she also needed to show in a technical class to make sure that she learned how to control the horse, not just go fast.

Kearney, Nebraska is a small town, and after a few competitions, word spread that Emily might have some talent that needed cultivation. After a couple of weeks, she found herself meeting with AQHA horse trainer Jet Thompson. He pointed Emily toward AQHA competition because he thought she had what it took to compete at an elite level.

Since then, Emily has amassed 1,307 AQHA points in the youth division. The majority of those points have been earned in Horsemanship and Trail. These two classes continue to be her favorites and her main focus during her last full year competing as a youth. Emily has accumulated those points on three different horses. ML Dynamic Venture, aka “Stevie,” was her first show horse. While aboard Stevie, Emily won her first Congress Championship in 11 and Under Trail. Two years later, the team claimed a Reserve Championship in Showmanship. At the 2013 AQHYA World Show, they placed twelfth in Trail and eighteenth in Western Riding. They earned nineteen Circuit Championships and four Reserve Circuit Championships.

Only Temptation, aka “Lefty,” was purchased in 2012, as a two year-old. Emily and Lefty have been finalists in Trail and Horsemanship every year they have shown at the Youth World Show. At the 2015 Youth World, they won that sought after golden globe in Trail. At the 2016 Congress, they were named the 12-14 Trail Champions. Emily was also named Reserve Champion in the same class with Hez Raising the Bar. They claimed a NSBA Trail Reserve Championship title twice and placed fourth in Horsemanship in 2018. At the 2018 Youth World, they placed eleventh in Horsemanship and fourth in Trail, along with accumulating 49 Circuit Championships and 12 Reserve Circuit Championships. This pair has won two Non-Pro NSBA Show for Dough/Rider’s Cup Trail competitions and finished Reserve in another.