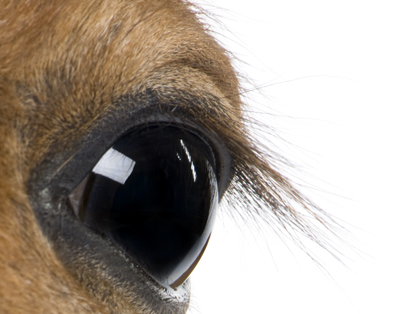 It has been known for a long time that changing daylength influences equine reproduction.

The natural breeding season for horses occurs during the brighter months of the year (April onwards in the northern hemisphere). This presents a challenge for breeders that require foals to be born early in the year, and has led to the search for ways to advance the onset of reproductive activity

Using stable lighting to artificially prolong the daylight to 16 hours from mid December onwards has been used to stimulate the onset of oestrus activity in mares. Research by Dr. Barbara Murphy demonstrated that a similar effect could be produced by shining a low intensity blue light into one eye.

Professor Christine Aurich and her research team at the University of Veterinary Medicine in Vienna, Austria have been investigating the effect of blue light treatment on gestation length, and pregnancy outcome. A full report is published in Domestic Animal Endocrinology.

Twenty pregnant Warmblood mares, each carrying a single pregnancy completed the study, which covered two consecutive years. The mares were kept at the Brandenburg State Stud at Neustadt, Germany. During one pregnancy the mares wore a mask* which directed 50 lux blue LED light (468nm) into one eye from 08.00 to 23.00 daily from mid- December onwards. During the second pregnancy the same mares received no treatment, and so acted as controls.

They conclude: “foaling can be advanced with head-worn masks emitting blue LED light to a single eye without negative effects on foal maturity. Blue LED light resulted in the birth of slightly smaller foals compared to controls. Furthermore, foals born to blue LED light-treated mares had a shorter hair coat than control foals, demonstrating that artificial light directed at the mare does reach its fetus and accelerates fetal maturation.”

For the entire update and link to the study, click here.