October 29, 2018 | Filed under: Current Articles,Editorial,Featured | Posted by: Alex A. 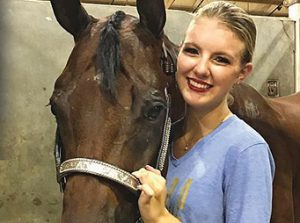 Horses are in the genes of sixteen-year-old Madison Musser. Her mother, Rebecca Fussell, grew up in the saddle and is still a successful competitor today. Madison’s maternal grandmother, Betty Wills, wrote for the Texas and Southern Quarter Horse Journal, which became the official publication of the Texas Quarter Horse Association. Madison’s grandfather, Connie Wills, was one of the founders of the TQHA. With all this family history, Madison certainly has big shoes to fill.

Like her Mom, Madison started out at 4-H and open shows before moving up through the ranks. Her mother Rebecca recalls, “My family has had a boarding facility since 1992, and my parents had a breeding operation when I was little. They all showed in Halter and Western Pleasure. When they realized I was serious, we went to the Fall Tattersalls sale and bought Ronos Congenial Lark, an all-around horse. I had him from 1994 until 2002. I had no trainer, and I did all my own work with him. I taught him Western Riding, and we even made the Top 10 at the Congress in Youth Equitation in 1999. When I got pregnant with Madison, my mom sold him to a friend, Morgan Alexander. My focus became Madison and, eight years later, her sister, Camden. They have the same love of horses that I did. I’m just blessed that my husband, Sean, is so supportive and allows us to do this together at this level.”