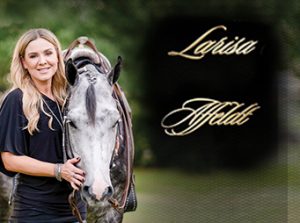 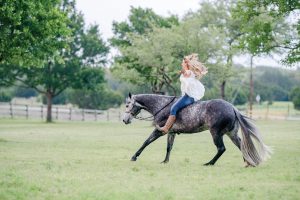 Mike admits, “I wouldn’t recommend doing that with most two-year-olds, but Charlie isn’t like most two-year-olds. I know how special he is, and I’m enjoying every ride with him. Larisa told me that she always wanted a horse that would let her lie on top of them while they were taking a nap in their stall, and, of course, Charlie didn’t disappoint.”
Larisa remembers, “I couldn’t believe it. He couldn’t have cared less that I was in his stall with him while he was sleeping. So, naturally, I had to try and sit on him, which quickly turned into me lying across him. I knew these types of horses existed. I just didn’t think I would be lucky enough to own one!”
After her Showmanship lesson with Charlie, Larisa told Mike that she wanted to try doing a flying lead change. Mike agreed that she could attempt it and see what happened. Without knowing what to expect, Larisa just went for it and asked Charlie for a lead change. He did it, with ease, on his first try. “Mike just looked at me and laughed. He said, ‘Well, I think it’s safe to say that he should be ready to show in the new 3-year-old Versatility class next year at the World Show.’”
The Silver Foxx or “GG,” as they call him is Larisa’s six-year-old, 16 hand, gray gelding. “He had a late start and didn’t get shown until he was a four-year-old. GG’s first time being shown was by Dave Archer at the Ohio Madness in 2017. He won the Maiden Horse, Three-Year-Old and Over Western Pleasure class,” Larisa says. “I always joke that GG must be a lefty, like my husband, Jeremy, who pitched in the MLB. In baseball, lefty pitchers peak later than right-handers. GG is just now starting to peak. It’s just a bit later than most.”
GG is so recognizable because of his striking coloring, so everyone comments on how pretty he is. More often than not, people refer to him as a mare. Larisa says, “He is too pretty to be a gelding. He’s honestly the most fun horse I’ve ever had the privilege to swing my leg over. It doesn’t matter what we’re working on or focusing on at the moment, he just gives it his all.”
“GG is an overachiever,” Mike says. “He beats himself up when he makes a mistake. He’s the kind of horse that we just have to continue to build his confidence in the show pen.”
In March of this year, Larisa started showing GG in multiple events. With very limited showing, they became qualified in Open and Amateur Western Riding, Open and Amateur Western Pleasure, Amateur Horsemanship, and Halter. “GG is my all-around horse, so we’re slowly adding more events. Next year, I would love to try Trail and Equitation with him. I also love Showmanship, but I recently had knee surgery. When I run in the dirt in my boots, my knee gets swollen fast. I’m always thinking about what classes I could add. I’ve even seriously thought about one day adding Hunter Hack to our lineup. GG likes to jump.”
Larisa’s dreams are simple. The real journey for her is about developing communication with her horses. “These are amazing animals that connect all of us crazy horse people. When they know us and we know them, when they trust us and we learn to trust them back, it’s such a beautiful thing. At the highest level of competition against the best horses in the world, the thrill of knowing your horse well enough to get the best out of him consistently every ride isn’t just one-way communication. Just as my horses are getting to know me, I’m getting to know them. To feel their moods, to learn their personalities, and become a team with them, for me, that’s my goal. Sure, I want to win some trophies along with way, but my biggest achievements have always been the little victories and the times when I have a great ride that I can be proud of, regardless of the placings. Win or lose, I’m grateful to be enjoying this journey.”