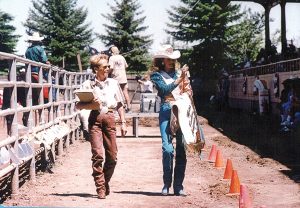 It really shouldn’t be a surprise that Ina Ginsberg won her first Congress Grand Champion title, at the age of 84, with Can’t Touch Her Guns.

To grasp an understanding of who Ina Ginsberg is, and how she could possibly still be at the top of her game in her eighties, it may be helpful to know a bit about her varied background. During her lifetime, Ina has “rode to the hounds” (Fox Hunting), competed in Eventing and Over Fences, owned a working cattle ranch, coached multiple Miss Rodeo America contestants, and bred, showed, and judged Champion Cocker Spaniels for 30 years, and that doesn’t even touch her accomplishments in the horse industry.

Once deemed “Wonder Woman” by Ralph Seekins, AQHA Second Vice President, Ina won 3-Year-Old Geldings at the 2015 Select World Show with Hez Packin Heat after being given a dire cancer diagnosis. Doctors had given her six months to live, but she was determined to beat the odds, and she did.

Ina’s renowned fiery personality and dedication to her animals leaves an impression on those who know her best. “She really has a fortitude,” explains her son, Allen Ginsberg. “I think she’s all of 94 pounds, but there’s some chemistry she has with the horses. She just loves them, and she loves participating with everyone at the shows.”

Her friend and fellow exhibitor, Cheri Gayton, agrees. She says, “As a horsewoman, she’s the hardest working and most persevering competitor that I know. To keep up with her sport, she works hard by going to the gym all week to be able to do what she loves, and that’s showing horses.”

Jeffrey Pait, Ina’s trainer and friend, explains that he can always count on her. “She always gives 100 percent every time she shows, and she works at it by exercising and practicing before the horse shows.”

For Ina, who now resides in Aiken, South Carolina, pulling out all the stops has been a way of life since she first touched a horse at an overnight camp near her childhood home in Massachusetts. Although the only animal she’d owned up until that point had been a goldfish, she found her calling on horseback that summer. “I wasn’t very good with baseball, tennis, and swimming, but I rode horses and found it was the thing I could do. I discovered that I loved it,” she says.

Throughout high school, she worked odd jobs and her parents would match what she made so she could ride. When she was married and had a family, her son began to ride lesson horses at a private school when he was eight years old. Within a year, she had a horse and a trailer. “Pam Gleason, the editor of The Aiken Horse, rode with my son and I, and eventually I started Fox Hunting,” she says. “I was raising dogs at the time, and I helped with the hounds. I wanted to try showing, so I started in low-level Eventing and Over Fences, and found I loved the competition.”

She was still riding when her husband, Arnold Ginsburg, wanted a winter home. When their son, Allen, attended college in Arizona, they fell in love with the West, and she found the thrill of Western horses. “The next thing I knew, she was buying a working cattle ranch in Northern Nevada between Elko and Reno,” Allen explains.

When they purchased their home in Cave Creek, Arizona, Arnold continued to commute to Boston for work. “I had horses at home for the first time in my life,” Ina says. When she bought a green rope horse that needed some tuning, she was referred to the legendary Mike Drennan in Phoenix.