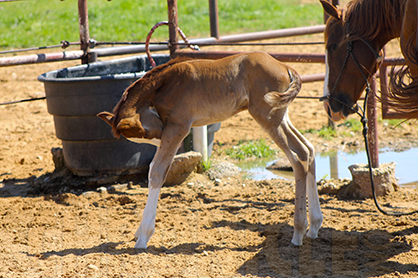 ST. PAUL, MINN. – Reports of Eastern equine encephalitis (EEE) along the East Coast of the United States climbed this summer, with an outbreak reaching as far inland as Michigan, where 27 horses, 11 deer, and nine human cases have been reported to date in the lower part of the state. Two states away in Minnesota, only two equine cases have been reported so far, from the same farm in Otter Tail County.

Emily Barrell, DVM, MSc, DACVIM, assistant professor in the Department of Veterinary Population Medicine at the CVM, wants Midwestern and Minnesota horse owners to know the facts about this deadly disease.

EEE is fatal in 30% of human cases and 90% of equine cases. It is also known to affect deer and other mammals, but is most common in horses. Horses and humans are both “dead ends” for the virus, meaning that the virus cannot be transmitted from one infected individual to another; the levels of virus in the bloodstream are too low for a mosquito  to pick the virus back up and spread it further. “Just like West Nile virus,” says Barrell, “the horse is not a threat to other horses.”

Horses with EEE can experience fever, dull mentation, blindness, become highly excitable, sometimes stick their tongue, or show signs of general neurologic disease. They can even progress to being recumbent and unable to stand. Fortunately, the vaccine for horses is very effective, if given appropriately.

“All reported equine cases of EEE in Minnesota in 2019 have been in unvaccinated or incompletely vaccinated horses,” says Barrell. “We recommend the EEE vaccine as part of the five core vaccines that all horses in this country should receive every year. The first time horses receive this vaccine, they need two doses spread two to three weeks apart, and then need a booster vaccine at least yearly thereafter. Horses that reside in endemic areas and young horses may require more frequent vaccination. And all horses should be vaccinated in the spring before mosquitos come out. Horse owners should work with their veterinarian to ensure their horse is properly immunized against EEE.”