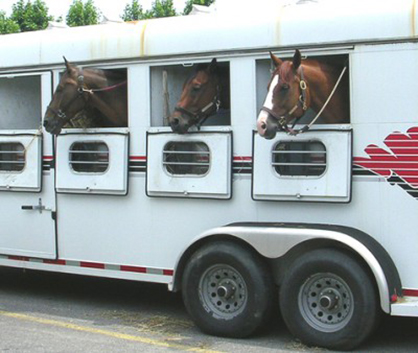 The Department of Transportation has granted a 90-day waiver from the requirement that agricultural and livestock haulers install electronic logging devices in their vehicles. Over those 90 days the department plans to look closely at agriculture’s request for an exemption while developing additional guidance for agricultural haulers.

Most farmers and ranchers should be exempt from the ELD mandate because they can claim covered farm vehicle status, but drivers who haul livestock, live fish and insects are likely to fall under the requirements.

In September, the American Farm Bureau Federation and seven livestock organizations petitioned DOT for a waiver and exemption from the Dec. 18 ELD implementation deadline. In their request, the groups explained their two biggest concerns about the requirement: livestock haulers’ readiness to comply and the effect on the transported animals’ well-being.

Drivers who have to use ELDs would be limited to current hours of service rules, which restrict a driver to only 14 “on duty” hours, with no more than 11 active driving hours. Once a driver hits those maximum hour allotments, he must stop and rest for 10 consecutive hours, which would be problematic when transporting livestock and other live animals.

In their petition, the groups pointed out livestock haulers’ strong commitment to ensuring the safety of both the animals they’re transporting and the drivers they share the road with.  In addition, livestock haulers often receive specialized training beyond that required for their counterparts driving conventional commercial motor vehicles. The pork industry’s Transport Quality Assurance Program and the beef industry’s Master Cattle Transporter program provide detailed instruction on proper animal handling and transportation methods.

“As reflected in the [Federal Motor Carrier Safety Administration’s] data, the emphasis these programs place on animal welfare benefits driver safety as it encourages livestock haulers to slow down, be more aware of their surroundings and road conditions, and avoid rough-road situations that could result in animal injury,” the groups noted.

Another major roadblock to implementation for livestock haulers is their lack of awareness of the rule. Because the livestock hauling industry is small compared to the overall trucking industry, it isn’t strongly engaged by DOT’s Federal Motor Carrier Safety Administration. As a result, livestock drivers who are aware of the program have had difficulty researching the ELD marketplace and identifying cost-effective solutions that are compatible with livestock hauling and current agricultural hours of service exemptions.

In their petition, the groups also asked DOT to address the incompatibilities between the FMCSA’s hours of service rules and the structure and realities of the U.S. livestock sector.

“For many drivers, there is concern that there are those, with no understanding of or concern for animal welfare or livestock hauling, who will arbitrarily penalize them for choosing the proper care of animals over stopping in excessive heat or cold because of an arbitrary HOS cutoff,” the groups said.

Click here to listen to a podcast about the extension.