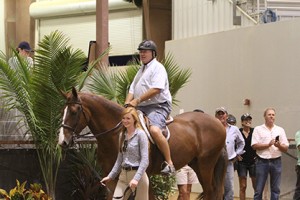 Last year’s Southeast Medal Finals launched the Parent Lead Line Class, a fun new class and an opportunity for parents to have their moment in the spotlight in the coliseum at the Jacksonville Equestrian Center. The tongue-in-cheek class returns this year to Southeast Medal Finals, which runs from Sept. 18-21.

Riders are encouraged to enter their parents, with or without their knowledge, to vie for top honors as well as additional awards in fun categories such as, the Most Confident, Most Likely to Turn Professional, Best Outfit, Most Terrified and Most Medicated.

“This class was truly one of the highlights last year,” said James Lala, from Lala Land Productions, who will manage the 2014 show alongside Stadium Jumping, Inc. “We couldn’t stop laughing. The parents really got into the spirit and came up with some really hilarious costumes.”

Parent Lead Line is open to parents of exhibitors. Competitors must lead their parent on horseback. Parents must wear an approved helmet and suitable shoes. Creativity is encouraged. All proceeds generated from this class will be donated to a soon-to-be-named charity.

In addition to the Parent Lead Line Class, highlights of the Southeast Medal Finals line-up include the $25,000 Jacksonville Grand Prix the Phelps Media Group Southeast Junior Medal and the ASPCA Maclay Regionals

WHAT: The Southeast Medal Finals is an A-rated indoor and outdoor hunter, jumper, and equitation horse show attracting top riders.

WHERE: The Jacksonville Equestrian Center, Jacksonville, FL, featuring a large indoor coliseum with over 3,000 seats, two outdoor rings and a turf arena plus schooling rings and 500 permanent stalls.