Discoυnts in the Breeding Biz – Now You See Them…Now You Don’t! 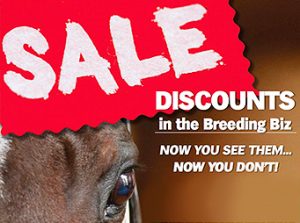 “Well, do you think it’s a boy or a girl?” asked the vet, smiling widely from the other side of the ultrasound machine.

The owner, who had waited on pins and needles to find out if her beloved mare had finally gotten in foal, squealed excitedly, jumping up and down when she heard the question. It would still be a long journey before the foal, resulting from two World Champions, would be on the ground; but, for now, she’d take the good news.

It has been said that breeding horses is not for the faint of heart, mostly because of the ups and downs that come with the business; and the financial aspect is no walk in the park, either.

For both stallion and mare owner, the costs can be astronomical, so it has become customary for discounts to be offered on stud fees in certain circumstances. But as breeding costs rise for everyone, and the industry evolves, when is it fair to expect a discount, and when do stallion owners feel it’s most justified? Is the practice of discounting stud fees a burden on stallion owners, or is it a good thing for everyone? Read on to hear perspectives from top industry breeding managers and owners, who are experts in their own right.

Most stallion owners offer some sort of mare discount. It’s one option for those looking for a price reduction on a stud fee.

Tobin explains that both World Champions and proven producers are eligible for discounts because they’re attractive in equal but different ways. “The producers have a proven record, but actual World Champions definitely have a strong possibility of producing their own World Champions,” she says.

In some cases, producers can hold more weight for negotiating power than a pointearner. Don Griffey of Griffey Equine Center, a celebrated veteran manager and reproduction expert, currently stands Rumerz, Heza Secret Agent, I Am Relentless, Repeated in Red, Heartz on Fire, Best Kept Secrete, and Dynamic in Blue. Griffey says the stallion owners he represents offer more consideration for a mare that has produced. “We’ve had a lot of mares who never had a show record, but have produced World Champions,” Griffey explains.