Developing a Show Calendar to Peak For the Majors 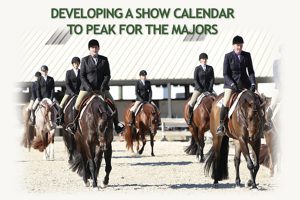 Like all professional athletes, there are many factors that go into achieving success for equestrians and their equine partners. An optimized feed program, consistent exercise regimen, and well-laid-out show schedule all contribute toward achieving a rider’s goals. The hope is to peak at just the right time to win a coveted award or elusive title.

While planning a show schedule for the year might seem simple, it’s actually a complex logistical endeavor that requires intensive planning. A schedule that used to consist of a few major horse shows–culminating in giants like the All American Quarter Horse Congress and breed World Shows–is now peppered with prestigious events such as The Championship Show, the NSBA World Show, and the A Sudden Impulse Futurity, just to name a few. A shift in focus, from competing for point, to the numerous opportunities now available to compete for money, has led to more options for exhibitors. Trainers across the country find themselves configuring their show schedules each year to ensure that each of their horses and riders are peaking at the right time for the right event.

For Ryan Cottingim of Spring Hill, Tennessee, laying out a strategic show schedule begins the year prior. Cottingim notes that he attends many of the same shows each year citing that those events always have staunch competition, which makes for good preparation for the more elite events. Cottingim says he often attends a local Quarter Horse show a week or two prior to a major event when possible. “It’s important not only to support local events, but weekend shows also benefit customers and horses to build toward major events,” Cottingim says.

Anthony Montes co-operates Vickery Performance Horses with Bruce Vickery in Pilot Point, Texas. This year, their team took a different approach. They chose to focus on one major event each month, instead of a combination of smaller local events, large circuits, and then the majors. This strategy was discussed well in advance with clients and the team to ensure an adequate plan was put in place for preparation.

Brenda Jeter of Jeter Quarter Horses in Weatherford, Texas, notes that developing her team’s show schedule is more complex given that she has horses that show at major events in several breeds including the APHA World Show, Palomino World Show, AQHA World Show, and NSBA World Show. Jeter’s approach to creating her show schedule caters to each client and their individual goals. She reflects that some clients need the larger circuits to feel prepared for the level of competition at an event like the NSBA World Show, while other riders need numerous, smaller weekend events to practice in order to reach peak performance for a major event.